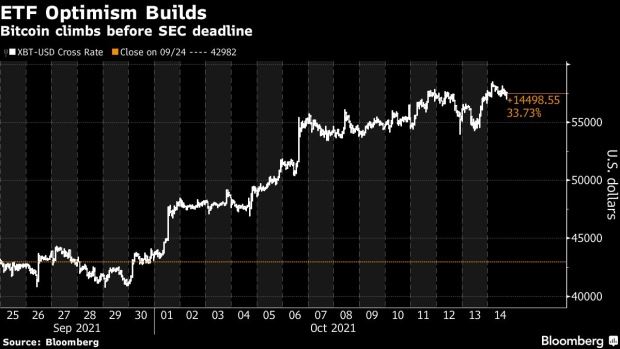 (Bloomberg) -- Optimism is sky-high in the $6.7 trillion exchange-traded fund industry that after nearly a decade, the first U.S. Bitcoin fund could begin trading next week.

In the past week, crypto lender BlockFi Inc. and Cathie Wood’s Ark Investment Management have put their names on applications for futures-backed Bitcoin ETFs, a structure that Securities and Exchange Commission Chairman Gary Gensler has hinted that he’d be open to. Meanwhile, Valkyrie Investments updated its futures-backed ETF prospectus with the ticker BTF on Wednesday -- typically a sign that an issuer is nearing launch, according to Bloomberg Intelligence’s Eric Balchunas.

The drama centers on Proshares, given that the SEC’s deadline to reject or approve the issuer’s futures-based filing under the Investment Company Act of 1940 -- a route that offers higher investor protection -- expires on Monday. While the ETF industry has watched the SEC demur on countless applications since the Gemini Trust Co.’s Cameron and Tyler Winklevoss filed the first in 2013, Gensler’s own words suggest this time is different, Balchunas said. The SEC head signaled he’d favor funds based on CME-traded Bitcoin futures in August -- a stance that he reiterated late last month.

“At the end of the day, really the strongest piece of evidence is Gensler’s own words. He literally told them what to do,” Balchunas said. “They can feel what’s going on.”

Should U.S. regulators give the greenlight, four futures-backed Bitcoin ETFs could begin trading on U.S. exchanges this month, with deadlines for applications from Invesco Ltd., VanEck and Valkyrie approaching. Meanwhile, dozens of cryptocurrency exchange-traded products have launched in Canada and across Europe.

Building speculation around a potential U.S. launch has fueled a torrent rebound in Bitcoin, with the world’s largest cryptocurrency breaking above $58,000 this week for the first time since May. Bitcoin has surged by over 90% since breaking below $30,000 in late July.

Of course, it’s far from certain that the current round of speculation is anything more than wishful thinking. There’s roughly a 25% chance that the SEC rejects or delays a decision next week, Balchunas said. And while issuers are clearly hopeful, there’s no way to know what regulators are thinking, according to Morningstar Inc.

“Issuers are desperately trying to do everything that they can to be the first, or among the first, out of the gate. This is a good old-fashioned asset grab,” said Ben Johnson, director of global ETF research at Morningstar. “The only thing I think we can say for sure is that they’re an indication of where these issuers think the SEC might be leaning.”