For Randy Ollenberger, the future of the Canadian energy industry looks a lot like the past.

In a report published earlier this week, the managing director of oil and gas equity research for BMO Capital Markets noted surging cash flows have led several companies to “announce massive hikes to their base dividend, expanded share buyback programs and special dividends,” in their latest quarterly results that are on a pace reminiscent of the income trust era of the early 2000s. Producers have become flush with excess funds in recent months as crude oil prices doubled compared to the same time last year.

“We do not see the cash parade ending anytime soon and believe the sector could be able to continue accelerating cash returns to shareholders,” Ollenberger wrote in the Nov. 16 report.

While the number one priority for several energy companies remains paying down debt, Ollenberger said in an interview Thursday that his coverage group “could buy back roughly one third of their outstanding float at current share prices” if oil and gas prices remain near their current levels. 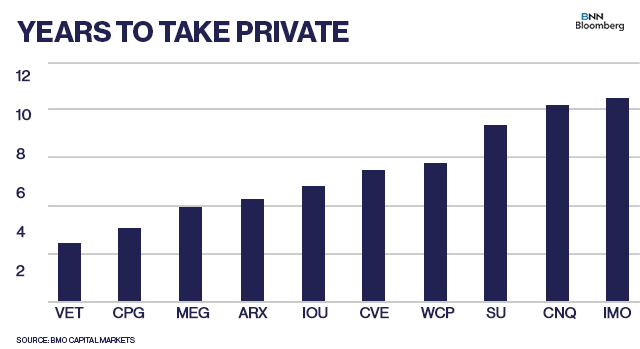 “The industry is really being very aggressive in terms of returning cash back to shareholders,” he said.

There is “potential” for some companies to buy back their entire outstanding share base, Ollenberger said, “particularly for some of the smaller companies where they have such low valuations and the market never seems to recognize their cash potential.” However, he believes “the market will recognize that at some point” and producers may shift “more aggressively towards a dividend model.”

Asked whether that meant a return to the pre-2006 era when many of Canada’s largest oil and gas producers were able to pay less taxes by structuring themselves as income trusts, which required them to prioritize returning as much cash to shareholders as possible, Ollenberger said “absolutely, I think that is the best analogy.”

“It is kind of moving back towards the income trust model,” he said, “albeit without the tax advantages that structure had.”

On Oct. 31 2006, in what became known as the Halloween Massacre, Canada’s then-finance minister Jim Flaherty brought an abrupt end to the income trust era by announcing a new 34 per cent tax on existing income trusts, leading many energy companies to forgo the structure.