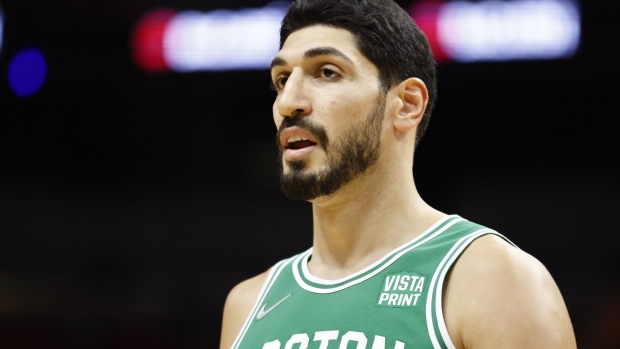 The player denounced President Xi Jinping as a “brutal dictator” and criticized China’s rule over Tibet in a message that contained a nearly three-minute video.  “Tibet belongs to the Tibetan people!” Kanter wrote in the tweet. Wearing a black tee shirt with an image of the Dalai Lama, Kanter said in the video he could no longer “stay silent.” “Under the Chinese government’s brutal rule, Tibetan people’s basic rights and freedoms are non-existent,” he added.

As of Thursday morning in Hong Kong, Tencent pulled off all the live-streaming for the upcoming Celtics games, leaving confused fans wondering why in the comment section on its sports page. The NBA and its China arm didn’t immediately respond to requests for comment. Tencent also didn’t respond.

The NBA is the most popular U.S. sports league in China and its business there is already a billion-dollar enterprise.

In 2019, a tweet by Houston Rockets General Manager Daryl Morey in support of pro-democracy protests in Hong Kong sparked a backlash from Chinese fans and corporate sponsors. State broadcaster CCTV suspended its television showings of NBA contests for about a year, while Tencent Holdings Ltd., which had just signed a $1.5 billion deal to stream NBA games online in China, halted the service for about a week.

While Kanter has been vocal on political issues before, his latest comment triggered some anger on Weibo, one of China’s largest social media platforms. Some users asked Kanter to be fired and called for a boycott of the NBA.

One influencer, who has more than 614,000 followers on the platform and posts regularly about the Celtics, said they would stop commenting on the team.

“We resolutely boycott any behavior that will undermine ethnic harmony and the motherland’s dignity,” the account, which goes by the name “Weibo express of the Celtics,” said in the post on Thursday.