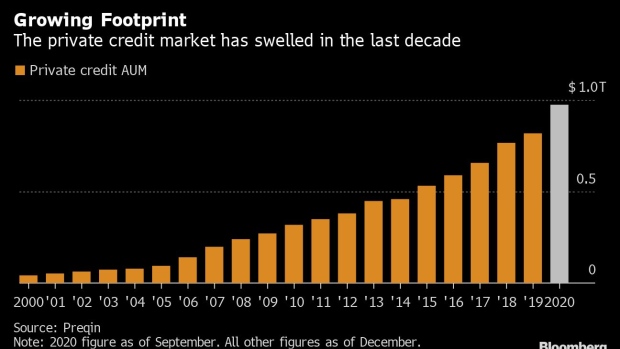 (Bloomberg) -- Investing giants Owl Rock Capital and Dyal Capital Partners completed their merger after clearing legal hurdles, with stock of the newly combined behemoth initially jumping as much as 11% on its first day.

Now known as Blue Owl Capital Inc., the company counted $52.5 billion in assets under management as of March 31, and 91% of the sum is permanent capital, according to a Thursday statement.

Blue Owl is the culmination of several Wall Street fads, including a public debut launched via a special-purpose acquisition company or SPAC. Owl Rock itself was a unicorn -- a fast growing, multibillion-dollar company -- after success in the red-hot private credit markets.

Meanwhile, Dyal has been raising record sums to buy stakes in money managers, competing with businesses at Blackstone Group Inc. and Goldman Sachs Group Inc. Dyal’s investments included some of the most prominent private asset firms, such as Silver Lake and Robert Smith’s Vista Equity Partners, which have each multiplied in size since Dyal bought in.

Owl Rock’s Doug Ostrover -- who was a co-founder of Blackstone’s credit unit before forming his new firm -- will serve as chief executive officer of Blue Owl. His colleague Marc Lipschultz, a veteran of KKR & Co., and Dyal founder Michael Rees will be co-presidents.

Blue Owl opted to go public via a merger with Altimar Acquisition Corp., a SPAC backed by HPS Investment Partners. SPACs, also called “blank-check” companies, are publicly traded shells that raise money from investors with the goal of buying an existing private business, typically without identifying a target until later. Such deals allow a private company to go public without the lengthy process of a traditional public offering.

Shares of Blue Owl began trading Thursday on the New York Stock Exchange under the ticker OWL, initially topping $11 before fading to little changed at about $10 as of 10:10 a.m. in New York.

Getting the deal over the finish line didn’t come without challenges.

Sixth Street Partners, in which Dyal owns a stake, competes for similar business with Owl Rock in the direct-lending market. Sixth Street sued to temporarily block the merger, arguing the deal would place it in competition with its part-owner. Golub Capital, another competitor to Owl Rock partially owned by Dyal, sued on similar grounds. Courts in Delaware and New York rejected those claims.

“It was an unfortunate chapter, but it’s a chapter,” Lipschultz said in an interview. “We’ve turned the page on that chapter, on to the next one.”

The combined business will offer public investors exposure to both direct lending and the stake-sale business. Dyal buys minority stakes in firms, giving investment managers a way to unlock wealth from rapid growth. Lipschultz described the merger as a “a next-generation model” for the limited partner and the investor community.

“We’ve really assembled a business that allows us to provide a one-stop shop for all of the financing services, capital services that an alternatives manager needs,” he said.

Private credit assets under management has surged over the past several years, nearly doubling to $975 billion as of September from $459 billion in 2014, according to London-based research firm Preqin Ltd. Record amounts of cash are being targeted for funds as investors search for higher-yield amid an ultra-low interest rate environment.

The merger will allow Blue Owl to capitalize on the growth and institutionalization of the alternative asset management business, according to Lipschultz.

As the industry has grown, so have the deal sizes. Firms that target the upper-middle-market like Owl Rock have clinched multibillion dollar unitranche deals, which blend first-priority and subordinated debt into a single facility.

Last month, Owl Rock led a $2.3 billion loan to help fund Thoma Bravo’s buyout of Calypso Technologies Inc., in one of the biggest deals ever seen in the private credit market. Lipschultz said there are more to come.

“We can comfortably lead a $3 billion financing,” he said, adding that the market has adequate capital to support a $5 billion unitranche. Those financings are better served in the private debt market, according to Lipschultz.

“You know the terms, you know the capital is going to be there, you know who your counterparties are,” he said, adding that there isn’t the same pressure of reporting that’s required in the public markets.

(Updates with share price and market cap in fifth paragraph)