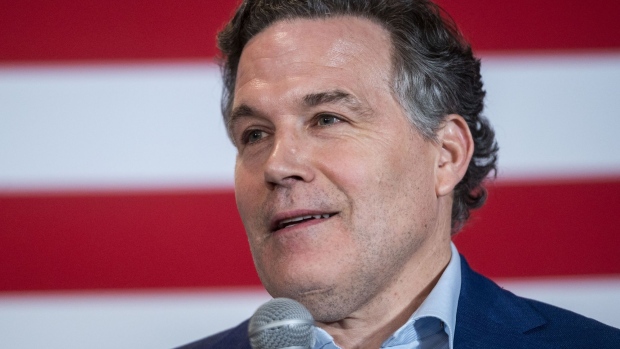 (Bloomberg) -- When politicians, business and civic leaders descend on New York City’s Waldorf Astoria on Friday for the annual Pennsylvania Society gathering, Democrats in the crowd will be celebrating the first time in 75 years that the state’s voters have not elected at least one Republican senator.

David McCormick, the former chief executive officer of hedge fund giant Bridgewater Associates, will be in attendance, too. His fellow Republicans are pushing for him to go up against three-term Senator Bob Casey in 2024 to restore the Commonwealth’s split in the chamber. McCormick himself is weighing another run, people familiar with the matter said.

“He’s giving it the due thought it deserves,” said Sam DeMarco, chairman of the Republican Committee of Allegheny County, who knows McCormick well enough to encourage him to run, and said his presence at the Pennsylvania Society event is an encouraging sign.

McCormick, 57, will release a book in March on leadership that “outlines a conservative agenda for American renewal,” his publisher said, a move that often precedes a run for public office. But he hasn’t made up his mind and could still return to the private sector, said a person close to him.

He lost this year’s Senate primary to former TV host Dr. Mehmet Oz by 951 votes. Oz went on to lose this month to John Fetterman, the state’s lieutenant governor -- by five points despite Fetterman being sidelined by a stroke that hampered his performance in the one and only debate. Fetterman’s victory in a seat now held by Republican Pat Toomey was a key pick-up for Democrats, who will keep control of the Senate with at least 50 votes.

McCormick launched this year’s Senate campaign only five months before the primary after stepping down from the top job at Bridgewater, the world’s largest hedge fund. He spent $14 million of his own money, on top of $21 million raised by a pro-McCormick super-PAC financed in large part by another hedge fund chief, Citadel founder Ken Griffin. But despite branding himself as an “America First” conservative, he lost the all-important endorsement of former President Donald Trump.

Many other Republican candidates championed by Trump were defeated in races around the country.

Yet Senate Republicans see 2024 as a much more promising year. Democrats -- and Democratic-leaning independents -- will have to defend 23 of 33 Senate seats up for re-election, including that of 62-year-old Casey, a key ally of President Joe Biden. Casey has not announced whether he intends to run again.