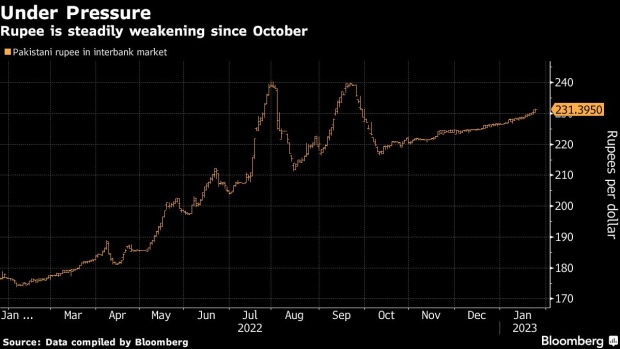 (Bloomberg) -- Pakistan’s money exchange companies will let the currency drop slowly in the open market after deciding to abolish the limit on the dollar-rupee rate.

The Exchange Companies Association of Pakistan has informed the central bank of its decision to remove the limit, President Malik Bostan said in a phone interview Wednesday. The group had earlier voluntarily decided to cap the dollar-rupee rate to help ease pressure on the currency.

The rupee fell 0.9% to 243 rupees a dollar in the open market on Wednesday, he said. The currency was steady at 231.50 per dollar in the interbank market.

The decision to remove the cap will curb the black market, where dollars are being sold at about 10% more than the advertised rates, and bring back the supply of the greenback at money changers. A more market-determined currency may also help Pakistan secure more money from the International Monetary Fund, whose disbursement of loans to the nation has seen multiple delays.

The association also requested the State Bank of Pakistan to help with increasing the supply of dollars to money changers, Bostan said.

“The cap that we had placed for the betterment of the country has turned out to be negative,” Bostan said in a video released to the media Tuesday. As the supply of the US currency increases, the dollar-rupee rate will slowly decline and the black market will end, he said.

(Updates with comments from the money exchange association, rupee decline in open market on Wednesday)