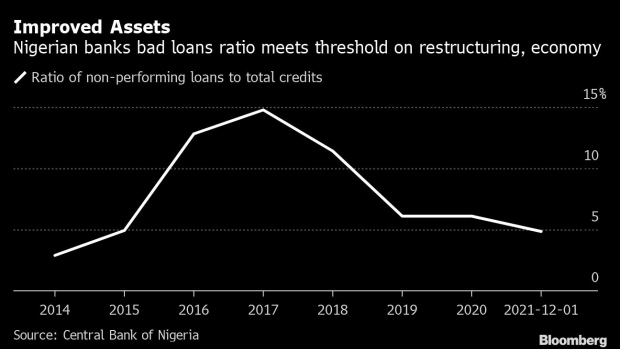 (Bloomberg) -- Nigerian lenders were able to bottle up their bad loans during the pandemic and could keep them at a low level last seen half a decade ago.

At the peak of the health crisis, the regulator permitted banks to adjust interest charges and loan terms without making additional provisions and gave more latitude for classifying debt as non-performing. Banks restructured as much as 41% of their loan book in 2020.

Almost two years later, banks betray little trace of the pandemic -- or the recession and a historic crash in oil prices they had to endure along the way. The proportion of non-performing loans ended 2021 at 4.85% of the total, down from a six-year peak of 14.8% in 2017, according to the Central Bank of Nigeria.

The NPL ratio will likely remain below 5% this year “on the back of relatively high oil prices and the gradual improvement in Nigeria’s economic outlook,” according to Kato Mukuru, managing director and head of frontier markets research at EFG-Hermes.

Anything above that threshold “puts incremental pressure on the capital,” he said by email.

The improvement in December is surprising after anticipation that a surge in bad loans was a risk as the economy hobbled along. A central banker also warned last year that NPL levels didn’t fully capture the state of asset quality because of the regulatory relief and moratoriums on repayments.

Instead, commercial banks lifted waivers on interest payments in 2021 and moved to recover some of their bad loans without any deterioration in asset quality.

The prospects are now brighter still because Africa’s largest economy is growing again after its worst contraction in almost three decades in 2020, with the central bank forecasting growth around 3% in 2021 and this year.

But the rebound could have its drawbacks. The share of bad debt could rise to 5.5% this year if credit growth reaches 10% as expected, according to Usoro Essien, analyst at Rand Merchant Bank.