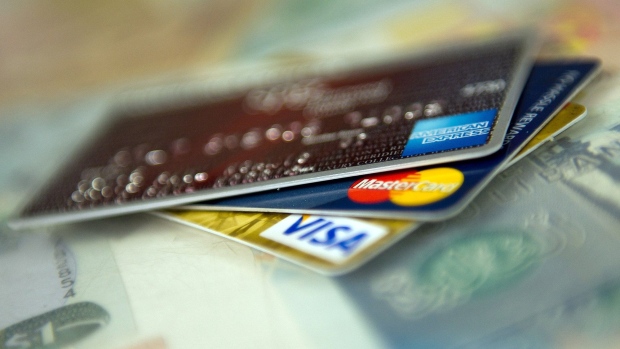 American Express Co., Mastercard Inc. and Visa Inc. credit cards are displayed over bank notes for a photo illustration at the Fog Hill Market in San Francisco, California, U.S., on Wednesday, July 20, 2011. Consumers may be relying more on their credit cards to pay for necessities like food and fuel, an indication that inflation is impacting spending habits. Photographer: Bloomberg/Bloomberg , Photographer: Bloomberg/Bloomberg

For Bethany and Derick Hingle, every dollar counts now.

In just a matter of weeks, the New Orleans couple -- he’s a self-employed photographer, she works at a jewelry store -- watched most of their income evaporate as the coronavirus pandemic shuttered businesses.

They began calling their banks, securing extensions for credit-card bills from Capital One Financial Corp. and a local credit union. They couldn’t catch a break on a US$75 payment due on a Home Depot card issued by Citigroup Inc.

“Everything came to a screeching halt,” Bethany Hingle said. “We’re just trying to hold onto whatever dollars we can right now. We don’t know when the next paycheck is coming in.”

It’s a scenario reminiscent of the 2008 financial crisis, with the nation’s biggest credit-card lenders once again grappling with a surge in calls from waves of the suddenly unemployed pleading for relief. The banks, which are also adjusting to social distancing as most of their employees must work from home, warn customers that wait times will be longer than usual.

The jobless rate and Americans’ ability to pay off their cards are closely correlated. In 2009, when unemployment topped 10%, the nation’s card lenders were forced to write off a record $89 billion of soured debt. On Sunday, Federal Reserve Bank of St. Louis President James Bullard warned the pandemic could push the unemployment rate to 30% in the second quarter.

Congress is preparing a US$2 trillion stimulus package, while regulators including the Fed are giving banks more leeway to ease consumers’ debt burdens, which should prompt lenders to work with borrowers more proactively, according to analysts at Keefe, Bruyette & Woods.

“The agencies encourage financial institutions to work prudently with borrowers who are or may be unable to meet their contractual payment obligations because of the effects of Covid-19,” the regulators said in a statement, referring to the disease caused by the coronavirus.

Still, some executives worry that if customers take advantage of forbearance programs it could just delay an inevitable default. Alliance Data Systems Corp., which issues retail-brand credit cards, warned that if customers flock to a 6-month hardship program it would materially impact write-off rates.

“You end up having less severe charge-offs but for a longer period of time because of the hardship programs,” the company said Tuesday in a conference call with analysts.

JPMorgan Chase & Co., Citigroup Inc. and Bank of America Corp. -- three of the biggest U.S. card lenders -- each get about 15 per cent of their revenue from that business, according to data compiled by Wells Fargo & Co. analysts.

In recent years, lenders began to curb the growth of their card portfolios as the longest economic expansion in U.S. history marched on. Still, credit-card balances reached a record US$930 billion last year.

During the depths of the financial crisis, as card write-offs mounted, lenders abruptly slashed credit lines or cut them entirely at a time when consumers needed them most.

“The issue is that banks still need to properly manage their loan portfolios while assisting customers,” Wells Fargo analyst Mike Mayo said in an interview. “Do you continue lending and supporting customers through a rough patch? Or do you pull back credit lines to protect the quality of the balance sheet?”

American Express Co. has abandoned its profit forecasts for the year. The New York-based company, which gets more than half of its revenue from the fees merchants pay with each card swipe, has seen a steady drop in spending this month. Almost 30% of spending on the company’s cards comes from travel and entertainment.

Banks such as JPMorgan, Capital One and Synchrony Financial have large portfolios of cards tied to retailers, many of which have been forced to shutter stores. Shares of Synchrony and Discover Financial Services both tumbled about 60% this year through Tuesday, among the worst performers in the 66-company S&P 500 Financials Index.

Many lenders have already begun to actively manage their loan portfolios and sell underperforming assets, according to a McKinsey & Co. report that analyzed how banks are responding to the pandemic.

Citigroup urged customers to reach out to the bank to learn more about options it has for credit-line increases.

“Lenders may want to become more proactive, too, anticipating instances in which increasing or decreasing lines can help customers,” McKinsey said in the report. “And initiating outreach campaigns that can demonstrate genuine concern for their financial well-being.”