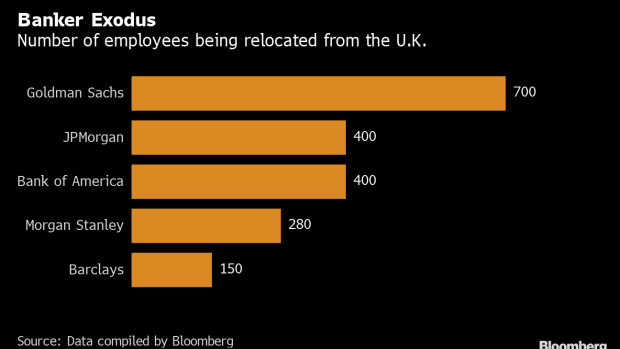 (Bloomberg) -- One of the best-known international schools in Paris is used to educating the children of foreign bankers, but it’s considering a larger-than-usual intake due to Brexit.

Ecole Jeannine Manuel, a bilingual French-English institution that charges as much as 21,000 euros ($23,000) per year, says it received 247 applications from London-based families for the current school year, which began last month -- almost double the level from two years earlier. Just 41 of those children were admitted, according to Bernard Manuel, the school’s chairman and a descendant of its founder.

So fewer of these children are turned away, Manuel says that the school is considering expansion in future years, which could involve hiring teachers and finding extra real estate. It educates about 2,400 students between the ages of 4 and 18, with annual cohorts ranging from about 160 for primary-school children and 200 from year 7.

“We are willing to consider an expansion due to the special situation of Brexit, and to help France be attractive to foreign expats,” Manuel said in an interview. “Based on contact with major players affected by Brexit, this could be just the beginning.”

As European Union regulations will require some securities to be traded inside the bloc after Britain departs, Bank of America Corp. and JPMorgan Chase & Co. are among the foreign banks who are in the process of relocating staff from London to cities including Paris.

Bank of America is preparing to have hundreds of staff at its new EU headquarters near the Champs-Elysees -- and some of those employees will be expats transferred from London with school-aged children. JPMorgan has also chosen to move staff to Paris, though it’s been spreading jobs across multiple European cities, including Dublin.

“In normal circumstances, we wouldn’t want to expand,” Manuel said. “We want to be better, not bigger.” He said the school admits students on a case-by-case basis, and doesn’t have any arrangements with individual companies to reserve slots for employees’ children.

Britain is scheduled to leave the EU on Oct. 31. Brexit day has been postponed twice already and may get extended again if talks stay deadlocked, but many financial professionals aren’t waiting to plan their move. Organizations that have already set up shop in Paris include the European Banking Authority, which relocated from London earlier this year.

Ecole Jeannine Manuel is located in the family-friendly 15th arrondissement in the French capital’s affluent southwest. Alumni include singer and actress Charlotte Gainsbourg. The school, which also has a branch in London, has been rated the best French lycee, or high school, for seven straight years by Linternaute.com, a news portal that ranks educational institutions.

Back in London, the exodus has meant some highly sought-after schools have had the rare phenomenon of empty slots. The parents beating down Ecole Jeannine Manuel’s door show why.

Manuel says that his school received 200 re-applications for the current school year from families who had moved from London last year, didn’t get a place for their child and tried again.

To contact the reporter on this story: Viren Vaghela in London at vvaghela1@bloomberg.net

To contact the editors responsible for this story: Ambereen Choudhury at achoudhury@bloomberg.net, Keith Campbell, Marion Dakers