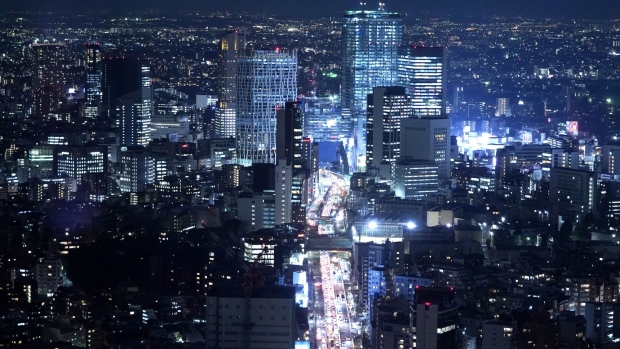 Traffic and buildings are illuminated at night in the Shibuya district of Tokyo, Japan, on Monday, March 18, 2019. Amid intense debate on Japan’s inflation target, some officials at the central bank think the 2 percent goal will probably remain out of reach for the next three years, according to people familiar with the matter. Photographer: Toru Hanai/Bloomberg , Bloomberg

(Bloomberg) -- Businesses and homes in Tokyo were asked to curb electricity use for a third day as a heatwave is set to reach its zenith for now, driving power margins to razor-thin levels.

The capital’s power-reserve ratios, which measure the spare electricity capacity, will drop below the 3% level considered the minimum for a stable grid, and are expected to plunge to 0.5% at around 5 p.m. local time, according to the country’s power grid coordinator. Temperatures are forecast to peak at 36 Celsius (97 Fahrenheit) on Thursday, which could be the highest this year, before dipping somewhat later in the two-week forecast period, according to the Japan Weather Association.

Tokyo has avoided blackouts for the past two days as residents and industries have responded to calls to curb power consumption, and after the nation’s grid manager ordered other regions to share supply.

Residents of the nation’s capital may need to get accustomed to hearing constant calls for electricity conservation, as supply is expected to be very tight this summer. Jera Co., the country’s top power producer, has pushed back the restart of one generation unit one day to Thursday on the back of maintenance delays.