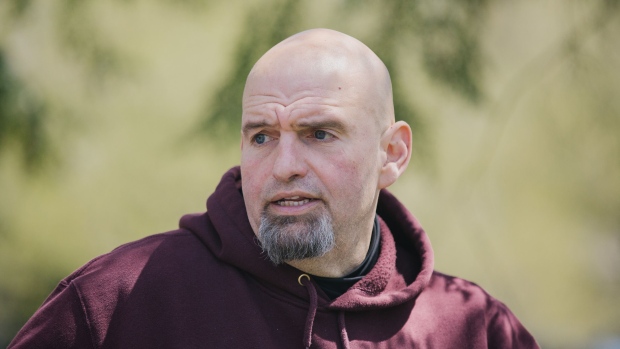 John Fetterman, lieutenant governor of Pennsylvania and Democratic senate candidate, speaks during a campaign event in Lebanon, Pennsylvania, U.S., on Saturday, April 30, 2022. Fetterman, the only candidate who has run statewide, leads the Democratic field with 33% in an Emerson College poll last month. Photographer: Michelle Gustafson/Bloomberg , Bloomberg

(Bloomberg) -- John Fetterman, the leading Democratic candidate for U.S. Senate in Pennsylvania, said he’s recovering after being hospitalized for a stroke.

The Pennsylvania lieutenant governor said he was able to reach Penn Medicine Lancaster General Hospital in Lancaster within minutes of first having symptoms on Friday. “The good news is I’m feeling much better, and the doctors tell me I didn’t suffer any cognitive damage,” he said in a statement on Sunday.

“I had a stroke that was caused by a clot from my heart being in an A-fib rhythm for too long,” Fetterman said. “The amazing doctors here were able to quickly and completely remove the clot, reversing the stroke, they got my heart under control as well. It’s a good reminder to listen to your body and be aware of the signs.”

Fetterman said he would take some time off the campaign trail to “get some rest and recover.”