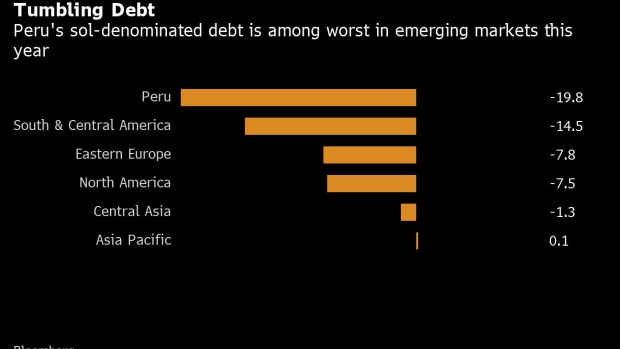 (Bloomberg) -- Peruvian assets have enjoyed a rare respite after a turbulent year. It may prove to be short lived.

Sol-denominated bonds have returned 7.9% since President Pedro Castillo accepted the resignation of his Marxist prime minister on Oct. 6 as investors cheered what seem to be a shift to the center ground for the 11-week-old government. That was the best performance among local-currency debt in emerging markets over the period.

Following the cabinet reshuffle, Castillo’s Peru Libre party withdrew its support for the government, shrinking the possibility of radical changes and further aiding bonds. But Peru’s political turmoil isn’t over yet.

Castillo must now navigate a fragmented legislature amid demands for higher taxes on the mining industry and a constitutional rewrite. And as if investors needed reminding of the dangers, Fitch Ratings cut Peru’s foreign currency debt score Friday, the second downgrade since Castillo came to power.

“The medium-term risk hasn’t disappeared,” said Mauro Roca, an investor at TCW Group in Los Angeles. “The market’s focused on the tail-risk reduction in the short-term, but if you look a little further, Castillo’s break up with an important part of his party leaves him with little support in congress.”

Emerging-market investors don’t have to look far to find just how much political risk can set back local assets. The Chilean peso ended the week little changed against the dollar, cementing its status as one of the worst performers in emerging markets this year, even after the central bank delivered a bigger-than-expected rate hike and the price of copper, the nation’s main export, posted its largest weekly gain since 2016.

Castillo, a former school teacher, has spooked investors since he came out of nowhere to lead the first round of presidential elections in April. He went on to win the runnoff and took office in July, promising to rewrite the constitution to make “responsible changes” to the nation’s economic model. He named Guido Bellido as prime minister, a leftist who has been accused of being an apologist for terrorism and has called for the nationalization of the nation’s largest gas field.

Peru’s local debt, battered by spikes in U.S. Treasury yields earlier in the year, has lost almost 20% in 2021, according to a Bloomberg index.

The underperformance coincided with concern that Castillo would be overshadowed in his own government by Vladimir Cerron, a Cuba-trained Marxist and president of the Peru Libre party.

“Castillo was silent in a corner,” said Aaron Gifford, an emerging-market sovereign-debt analyst at T. Rowe Price Group in Baltimore. “He wasn’t saying much of anything.”

The cabinet reshuffle “signaled that Castillo was giving up on the radical part of his party,” Gifford said. Investors breathed a sigh of relief.

Peru wasted no time, using investors’ new found optimism to issue domestic debt on Thursday for the first time in five months. Demand for the sale of $43 million of sol-denominated bonds outstripped supply by nine times, the Finance Ministry said.

The yield on sol-denominated bonds due in 2031 fell to 5.8% this week, the lowest since Castillo came to power, though it remains far below the 3.5% it reached earlier in the year, before U.S. Treasuries spiked and Castillo appeared on the scene.

Dollar debt has held up better, returning 1.4% since Castillo came into the picture six months ago until his cabinet reshuffle, in line with a Bloomberg emerging-market sovereign debt index.

But risks are never far from the surface in Peru. Fitch cited a deterioration in policy credibility after years of political turmoil for its downgrade last week.

Moody’s Investors Service cut Peru’s rating a month earlier, while S&P Global Ratings assigned a negative outlook to the country, saying that a “fragmented political environment and a difficult social legacy from the pandemic” threaten the country’s debt metrics.

The events of the past few weeks are a “short-term relief,” said Alejandro Arreaza, an economist at Barclays Plc. in New York. “It limits the worst-case scenario risks, but increases the instability of the system. To keep in power, he’ll have to spend more and that implies more debt.”