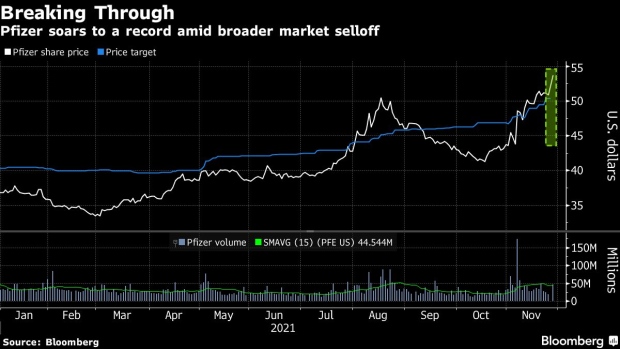 (Bloomberg) -- Pfizer Inc. jumped to a record Friday on the promise of its Covid-19 vaccine and antiviral pill even as fears of a new variant tamped down much of the rest of the U.S. stock market.

The drug maker added more than $17 billion to it market value as the shares climbed 6.1% at 12:02 p.m. in New York trading. Pfizer’s vaccine with BioNTech SE is now the best-selling drug product on a yearly basis and received backing from a European regulatory panel on Thursday to expand its use into children as young as five. BioNtech shares surged 21%.

New York-based Pfizer is waiting to hear back from U.S. regulators on a new Covid pill, Paxlovid. The company filed for an emergency use authorization for the medicine on Nov. 16. Friday’s results from Merck & Co.’s competing pill appeared less effective than prior estimates.

The new variant, B.1.1.529 also being called “Nu,” was first identified in South Africa and infected two people quarantined in a hotel in Hong Kong. “In the event that [a] vaccine-escape variant emerges, Pfizer and BioNTech expect to be able to develop and produce a tailor-made vaccine against that variant in approximately 100 days, subject to regulatory approval,” a company spokeswoman said in an email.

The next two weeks will be critical, said Citigroup Inc. analyst Andrew Baum. “Concern over Nu needs to be balanced against the failure of other concerning variants such as Beta (also first identified in Africa) to out-compete delta,” he said. The new antivirals should still work against the variant though resistance may eventually appear, he wrote in a research note.

Pfizer’s stock is up more than 45% this year. Other vaccine stocks also rallied on Friday with Moderna Inc. jumping as much as 28% for the biggest climb in over 17 months.