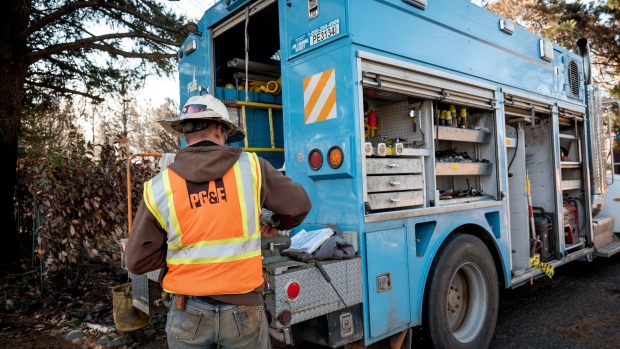 (Bloomberg) -- A group of PG&E Corp. creditors is making a final push to present a rival restructuring plan rather than let the bankrupt utility continue to control its own reorganization.

The ad hoc committee of unsecured noteholders -- led by Pacific Investment Management Co., Elliott Management Corp. and Davidson Kempner Capital Management -- said in a bankruptcy court filing Tuesday that its proposal is the “only credible, confirmable plan” for the utility.

The fight over terminating PG&E’s exclusive control of its reorganization will come to a head at a court hearing in San Francisco Wednesday. The creditors group is asking Judge Dennis Montali to change his May order granting PG&E exclusive rights until Sept. 29 to submit a plan to restructure and exit bankruptcy.

That’s too long to wait, the creditors group contends.

“It is in no stakeholder’s interest to waste critically important time to pursue plan constructs that are not credible or potentially confirmable, especially those that lack funding to address wildfire claims,” the group said.

Among other hurdles, PG&E’s plan requires legislation that would allow it to issue tax-exempt bonds, according to the filing. California Governor Gavin Newsom said this month that he didn’t support the company’s proposal at the time. There’s no reason to assume Newsom and state lawmakers would reverse course now, the creditors group said.

PG&E filed for bankruptcy in January to deal with an estimated $30 billion in liabilities from wildfires that its equipment may have ignited in 2017 and 2018. The judge will decide whether to allow the ad-hoc committee of creditors, and potentially other stakeholders, the opportunity to present their own reorganization plans.

Several stakeholders said they believed Montali is unlikely to terminate PG&E’s exclusivity early and that he may make his ruling during the hearing. The stakeholders asked not to be identified predicting what the the judge might do.

PG&E has accused the bondholders of trying to “hijack the Chapter 11 plan process” and argued last week in a court filing that it should be allowed to finish its plan without interference. The company alleged the creditors have already undermined its exclusivity by pitching their plan to various stakeholders.

PG&E said in a court filing that Elliott and the group lobbied against its effort to pass legislation to allow for the issue of tax-exempt bonds to pay wildfire victims.

“Terminating PG&E’s exclusive period less than six months after the commencement of bankruptcy proceedings would create unnecessary chaos that would not be in the interest of PG&E customers, employees, and other stakeholders,” the company said in a statement Tuesday.

The creditors said in Tuesday’s filing that PG&E’s “attempts to smear this group as ‘hijackers’ only demonstrates their desperation and the absence of cogent arguments to deny termination.”

The group is seeking to present its own $31 billion reorganization proposal. The plan would include as much as $20 billion in cash from the group in exchange for up to 95% of the equity in the newly reorganized company. Existing shareholders could see their equity of about $9.6 billion reduced to just over $1 billion under the plan, or roughly from $18 a share to $2 a share.

San Francisco-based PG&E has been lobbying lawmakers to allow it to fund its own plan by diverting a portion of its earnings and cost savings in order to issue tax-exempt bonds to help fund its past and future wildfire claims, people familiar with the matter said this month. It hopes the new legislation could be passed before the September deadline. The current plan doesn’t contemplate any new equity from shareholders.

If that legislation doesn’t pass, PG&E is considering raising the capital to help finance part of its reorganization through a rights offering that could allow existing shareholders to buy new equity in the utility proportionate to their current holdings to avoid dilution, people familiar with the matter said this month. A rights offering would delay the company’s emergence from bankruptcy, they said.

A group of investors, including Seth Klarman’s Baupost Group, that bought legal claims at PG&E also called for the termination of the utility’s exclusivity period on Tuesday and presented the broad strokes of its own reorganization proposal. The group owns both subrogation claims -- in which insurers sell the right to sue to recoup damages suffered by policyholders -- as well as equity and other investments in the company, according to the filing.Baupost is the largest investor in the group, holding about $3.4 billion in subrogation claims and $438 million in common stock, among other investments. It said the company has made little progress with its own plan and other stakeholders should be allowed to present their own.

Its plan would see the settlement of subrogation claims for a distribution of $15.8 billion, 90% of which would be in preferred shares, 10% in cash and the funding to create a settlement trust for individual wildfire victims. It would allow individual wildfire claimants to settle their claims promptly or litigate and receive their settlement from the trust.

The plan would also enable PG&E to settle its subrogation claims at a reasonable level and provide existing shareholders, including those in its group, the right to participate in a rights offering to recapitalize the company, the group said.

PG&E started a process last week by which the bankruptcy court would develop an estimate of the total liabilities the company would face for the tens of thousands of Californians affected by the fires.

The company has so far reached an agreement with only 18 public entities -- including cities, counties and districts -- affected by the fires amounting to $1 billion.

The ad hoc committee said in its filing that it wasn’t surprising PG&E had made so little progress with claimants, arguing that the company was “unwilling to have a serious dialogue with bondholders and key creditors about alternative and more efficient ways to access capital, because any such financing would dilute the position of current shareholders.”

To contact the editors responsible for this story: Liana Baker at lbaker75@bloomberg.net, Michael Hytha, Rick Green