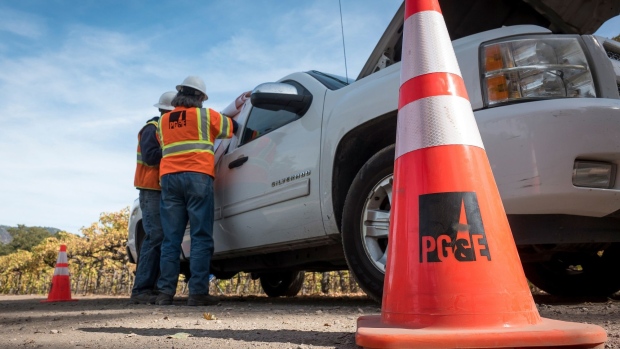 PG&E Corp. workers look at a map as they prepare to energize power lines in Calistoga, California, U.S., on Thursday, Oct. 24, 2019. In a deliberate blackout designed to keep power lines from igniting wildfires, PG&E and other utilities have cut service to nearly 200,000 homes and business in shutoffs that could eventually affect 1.5 million people as wind storms threaten to knock down power lines. Photographer: David Paul Morris/Bloomberg , Bloomberg

(Bloomberg) -- PG&E Corp. could be ordered by a judge to restrict bonuses and incentives for supervisors and other high-ranking employees until the company meets its obligations under its wildfire-prevention plan.

U.S. District Judge William Alsup threatened Friday to tie incentive pay “exclusively” to meeting goals for fire mitigation and other safety issues. He directed the company to explain in writing by Feb. 12 why he shouldn’t issue such an order.

The bankrupt utility disclosed this month that it had fallen short of commitments it made to inspect and repair lines, clear vegetation and cut tree branches. Alsup is overseeing the company’s probation after PG&E was convicted in 2016 of gas-pipeline safety violations.