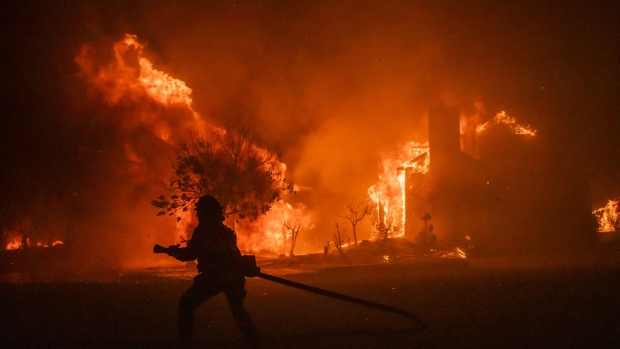 A firefighter carries a hose as buildings burn in the Skyhawk Park neighborhood of East Santa Rosa during the Shady Fire in Sonoma County, California, U.S., on Sunday, Sept. 27, 2020. , Philip Pacheco/Bloomberg

A wildfire ripping through Northern California’s wine country has more than tripled in size, forcing thousands of evacuations and endangering properties in a region devastated by blazes just three years ago.

The Glass Fire north of San Francisco reached more than 36,000 acres as of Monday evening, up from 11,000 acres in the morning, and is 0 per cent contained, according to a briefing by officials in Sonoma County. A second fire that erupted over the weekend in Shasta County is also raging and has killed at least three people.

PG&E Corp. said Monday evening that it restored power to nearly all of its customers after cutting service to about 195,000 people in an attempt to keep its electric lines from sparking blazes during hot weather and high winds. Much of California was under threat from critical fire conditions Monday, affecting about 5.8 million people, the U.S. Storm Prediction Center said. Winds were forecast to ebb in the northern part of the state in the evening, potentially giving firefighters a break.

More than 68,000 people are under evacuation orders in Sonoma County, according to the sheriff’s office. Governor Gavin Newsom urged people to heed warnings and leave immediately when authorities sound the alarm.

“So many of the people that have lost their lives were just cautious in terms of taking seriously those orders,” Newsom said in a media briefing Monday. “We really, really cannot say it enough. Please heed local law enforcement. Please listen to them when they raise that alarm bell.”

California has been battered for weeks by rounds of extreme weather that state officials say have been fueled by climate change. Last month, a record-breaking heat wave triggered the state’s first rotating power outages since the 2001 energy crisis -- and was followed just three weeks later by another one. More than 8,000 wildfires have burned a record 3.7 million acres this year, choking cities with smoke, killing at least 26 people and destroying more than 7,000 structures.

On Monday, more than 18,000 firefighters were battling 27 major blazes across the state.

Shares of PG&E -- which went bankrupt last year after its equipment ignited catastrophic fires -- fell 5.5% Monday, the most in three months. The company told its employees that it has no information indicating that its equipment was involved in the start of either the Glass Fire or the Zogg Fire in Shasta County, according to an internal memo obtained by Bloomberg News.

The causes of the blazes remain under investigation.

The Glass Fire broke out early Sunday and was raging northeast of Santa Rosa, the area devastated by the 2017 Tubbs Fire, among the most destructive in California history. Properties damaged in the famed vineyard region included the Chateau Boswell estate, the Meadowood resort and the Castello di Amorosa winery, according to the San Francisco Chronicle.

While Northern California’s weather conditions are expected to improve, Newsom warned that strong offshore winds could develop overnight to the south. He said state officials are dispatching firefighters there in case blazes break out.

Utilities across the U.S. West are increasingly cutting power ahead of wind storms to reduce the chances of their live wires igniting blazes. In Southern California, investigators are looking at a power line owned by Edison International’s Southern California Edison as part of their probe into a fire that’s burning in the mountains near Los Angeles.

PG&E began shutting off power on Sunday to parts of 16 counties. The move affected about 65,000 homes and businesses, or about 195,000 people based on the size of the average California household.

California’s peak wildfire season traditionally runs from September through November. It has grown longer and less predictable in recent years, with blazes coming as late as December.

--With assistance from Stephen Stapczynski.