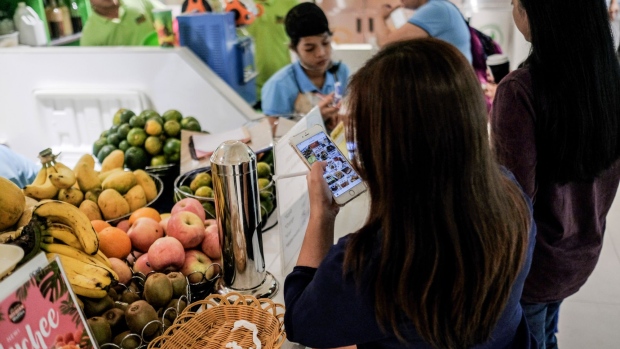 A customer uses the Globe Telecom Inc. mobile payment application on her smartphone at a cafeteria in Taguig city, Metro Manila, the Philippines, on Monday, Oct. 23, 2017. Globe is tapping its partnership with Chinese Billionaire Jack Ma’s Ant Financial for capital, expertise and technology, Cu said in an interview. Photographer: Veejay Villafranca/Bloomberg , Bloomberg

Globe, in a statement Tuesday, said it has asked the telecommunications regulator to require DITO to pay 622 million pesos ($11.2 million) in penalties over alleged violations of interconnect rules. Globe said DITO’s network supposedly allowed a daily average of 1,000 calls that were “identified as international in origin but masked as local calls.”

PLDT unit Smart Communications also made similar allegations, saying in a separate statement Tuesday that DITO “has failed to prevent its network from being misused for fraud.” Smart said it has incurred “huge monetary losses” as DITO SIM cards were supposedly “masking international calls as domestic.”

Responding to Globe’s and Smart’s allegations, DITO said in separate statements sent Wednesday that the calls were “made by third parties,” and that it’s “equally a victim of such calls.” It also said it has undertaken steps to minimize them.

Globe said in another statement Wednesday that it asked the telecommunications regulator to temporarily disconnect its interconnection trunk lines with DITO to prevent further breach. Globe also said DITO’s debt grows about 2.5 million pesos daily due to the alleged violation.