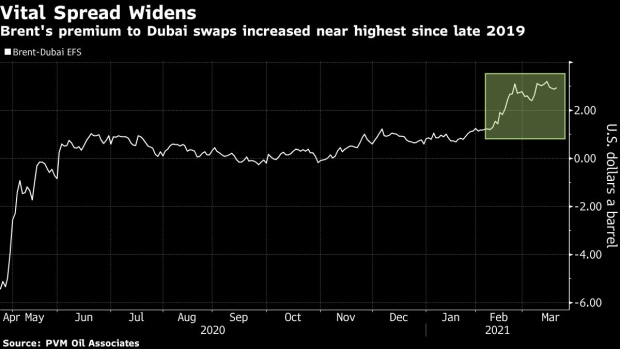 Workers cross walkways between zones aboard an offshore oil platform in the Persian Gulf's Salman Oil Field, operated by the National Iranian Offshore Oil Co., near Lavan island, Iran, on Thursday, Jan. 5. 2017. Nov. 5 is the day when sweeping U.S. sanctions on Iran’s energy and banking sectors go back into effect after Trump’s decision in May to walk away from the six-nation deal with Iran that suspended them. Photographer: Ali Mohammadi/Bloomberg , Bloomberg

(Bloomberg) -- The market for physical crude barrels in Asia is showing signs of weakness with muted buying from some in China leading to ample supply.

Spot differentials for cargoes scheduled to be loaded in April or May from the Middle East and Russia -- which make up a large portion of the oil consumed by Asian refiners -- have suddenly dipped. The premium of Abu Dhabi’s Murban crude slipped about 10 cents a barrel in a single day, while Russia’s ESPO was sold recently at least 60 cents cheaper than deals earlier in the week.

The retreat of Chinese buyers from the market coincides with a higher intake of Iranian crude in recent weeks, which has attracted the ire of the U.S. The prospect of Korea National Oil Corp. offering supply from its strategic reserves -- although fleeting -- also put pressure on the market. A so-called lease and re-delivery tender was issued and then recalled on Wednesday, but it was enough to contribute to spot differential weakness, according to traders.

Spot buying in Asia started the week on a strong note with a slew of tenders issued and a vital spread signaling Middle Eastern oil as a more attractive supply option. Murban crude traded at a premium of about 35 cents a barrel to the grade’s official selling price, with some cargoes sold even higher, however it’s since eased to a premium of 20-to-25 cents, according to traders who asked not to be identified as the information is private.

Global supplies are expected to remain plentiful and concerns of a shortfall are misguided, the International Energy Agency said against a backdrop of continuing output curbs from OPEC+. Meanwhile, the premium of Oman crude to Dubai swaps, which indicates the strength of Middle Eastern oil in the spot market, slid by about 30 cents a barrel Wednesday from a day earlier.

(Updates with a chart.)