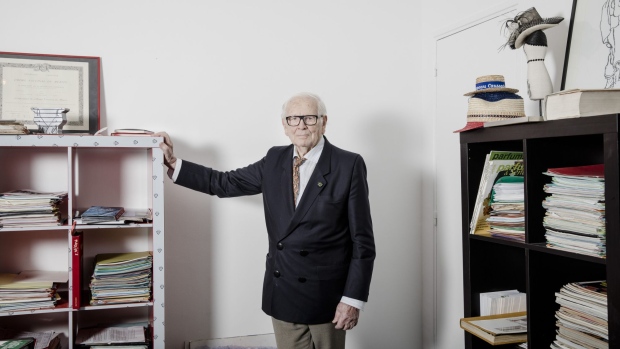 Pierre Cardin in his Paris office in 2016. , Bloomberg

Pierre Cardin, the Parisian designer who forever changed fashion when he broke with French couture houses and offered ready-to-wear clothing in department stores, ultimately transforming his name into a diversified global brand, has died. He was 98.

The Agence France-Presse reported the news, citing his family. France’s Academy of Fine Arts confirmed the news in a tweet.

He lived in Paris and acquired properties including a castle in the south of France once owned by the Marquis de Sade and the Palais Bulles, or “Bubble Palace,” his futuristic mansion in Cannes.

Cardin made his mark artistically in the 1960s as a leading designer of the “Space Age” look, with unisex clothing, bold geometric patterns and the use of vinyl and plastic.

In 1959, at the Paris department store Printemps, Cardin became the first designer to introduce a ready-to-wear -- or “pret-a-porter” -- women’s line for a broad audience. With that act of independence, Cardin steered himself away from the haute couture houses that dominated the Paris fashion scene.

“It was Cardin who first equated fashion design with the masses, and he made the notion of luxury for everyone into an international currency,” fashion writer Elisabeth Langle wrote in a 2005 book, “Pierre Cardin: Fifty Years of Fashion and Design.”

“They said pret-a-porter will kill your name,” Cardin said in an interview, “and it saved me.”

He was also a pioneer in men’s fashion. He opened Adam, a boutique featuring printed shirts and ties, in 1957, and three years later presented the first haute couture show for men. His high-buttoned, collarless jackets captured the fancy of four lads from Liverpool, England, and as the Beatles conquered the music world, the Cardin look soared with them.

Cardin leveraged his fame through branding, licensing and franchising. For many years, he said his trademark had 800 licenses in 140 countries. By mid-2017, the number of active Cardin licenses had dropped to about 350.

At times he was cited as an example of licensing run amuck. Time magazine, in a 1975 story, called him a “shrewd fantasist who has tacked his name on to just about anything that can be nailed, glued, baked, molded, bolted, braced, bottled, opened, shut, pushed or pulled.”

The results were mixed. The Brussels and Rio restaurants closed within a few years, and the New York restaurant shuttered in 2000.

Cardin took his clothing to every corner of the globe. He targeted the Japanese market after visiting there in 1957, signed production agreements with the Soviet Union in 1978 and, in 1979, became one of the first western companies to do business in China.

Cardin long ago announced that he intended to sell his empire, which he estimated to be worth at least 1 billion euros.

It wasn’t at all clear that anybody but Cardin could run his runaway brand. Richard Morais, in his 1988 biography “Pierre Cardin: The Man Who Became a Label,” said Cardin was better at spinning -- and sometimes embellishing -- his image than at running a company.

“The Cardin empire was a giant fungus with its own independent life,” Morais wrote. “Spores of independent licensees grew in the dark and crept into every corner of the earth, fertilized by a steady supply of superb public relations. Sometimes, one would have to think, the empire grew in spite of Cardin.”

Pietro-Costante Cardin, the youngest of 11 children, was born on July 2, 1922, in the Italian village of San Biagio di Callalta, near Venice. His parents were farmers and winemakers whose land and business had been ravaged by World War I. The family moved to southeastern France when Cardin was 3 years old.

In 1944, he arrived in Paris and two years later began working for designer Christian Dior, who was assembling his own fashion house.

He opened his own firm in 1949 and presented his first haute couture women’s collection four years later. He said Argentina’s first lady, Eva Peron, and American actress Rita Hayworth were among his earliest clients.

Cardin’s ballooning bubble dress brought him lasting acclaim after it was introduced in the mid-1950s. In the 1960s, he positioned himself as a futuristic designer attuned to the fantasy of the Space Age. He embellished his outfits with geometric shapes, vinyl, oversized zippers, goggles, visors, even helmets.

“The dresses I prefer are those I invent for a life that does not exist yet: the world of tomorrow,” he said.

A 1966 Time magazine article said Cardin’s clothing for men was growing by US$8 million annually, five times the gross of his women’s line, and his customers included actors Gregory Peck, Yul Brynner and George Hamilton. That year Cardin opened a menswear shop in New York City at Bonwit Teller.

He made his first set of haute couture furniture, called “Utilitarian Sculptures,” in 1977.

He expanded his empire in the 1980s, opening boutiques in Paris, Budapest, Peking and London.

Cardin, who once had a love affair with film star Jeanne Moreau, never married or had children. Moreau died in July 2017.