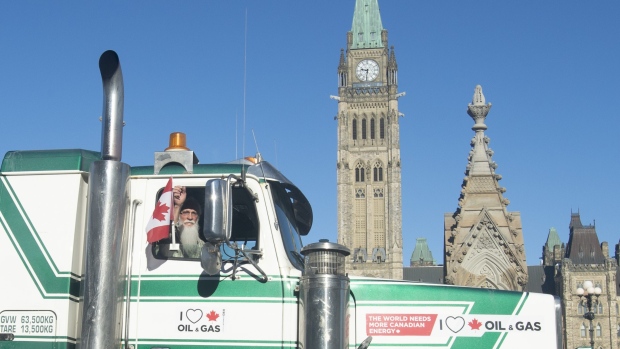 A passenger raises his arm as the convoy pulls in front of the Parliament buildings in Ottawa, Tuesday, February 19, 2019. , The Canadian Press

OTTAWA - A convoy of angry Albertans and other westerners rolled up to Parliament Hill today to protest federal energy and environmental policies.

Scores of people gathered in knee-deep snow on the Hill lawn in advance of morning speeches amid concerns the convoy has become a magnet for extremist, anti-immigrant elements.

The United We Roll convoy began in Red Deer, Alta., on Valentine's Day and made its way east over four days with stops for rallies along the way.

The protesters want the Liberal government to scrap the carbon tax and two bills that overhaul environmental assessments of energy projects and ban oil tankers from the northern coast of British Columbia.

Small business owner Jerry Fetting, who flew in from Stony Plain, Alta., says he has been affected by the drop in oil prices in recent years.

The master of ceremonies, Ron Barr, repeatedly told the Hill crowd to leave the media alone, saying they're trying to help tell the story.