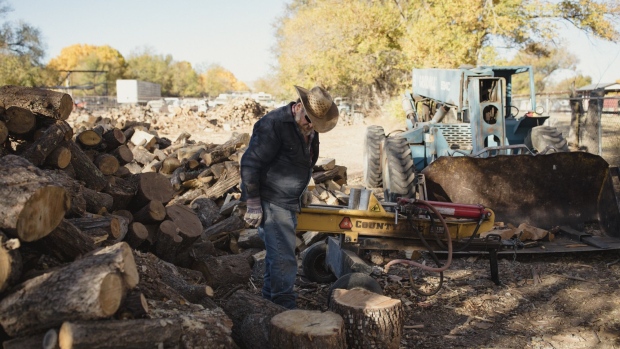 A worker prepares to split wood at Zia Firewood in Albuquerque, New Mexico, U.S., on Saturday, Nov. 13, 2021. Amid the inflation surge that’s rippled through the U.S. economy, one of the more obscure items on the list is firewood with sales booming on the eve of winter and prices soaring. , Bloomberg

(Bloomberg) -- PNM Resources Inc. shares fell the most in almost 18 months after the majority of New Mexico regulators voiced opposition to Avangrid Inc.’s $4.3 billion bid to take over the company, which owns the state’s biggest utility.

Three of the five commissioners at the New Mexico Public Regulation Commission said they agreed with the conclusion of a hearing examiner who recommended the agency reject the deal because the potential harms of the transaction would outweigh the benefits.

The commissioners cited concerns about the ability to regulate potential conflicts of interests in the corporate structure of Avangrid’s Spanish owner Iberdrola SA, other ethical concerns and Avangrid’s poor track-record with utility service in the U.S. Northeast.

“The company has a horrible record of running U.S. utilities,” Commission Chair Stephen Fischmann said of Iberdrola during a hearing Wednesday. Fischmann called the companies’ additional commitments and financial promises “fool’s gold sitting in a pond of quicksand.”

PNM shares dropped as much as 5.7% in New York on Thursday morning, the biggest intraday decline since June 2020. Avangrid shares were down as much as 2.2%.

The commissioners didn’t hold a formal vote on the transaction. The regulators indicated that they may be open to reopening the case to consider additional modifications to the deal by the companies.

“We are disappointed that the hearing examiner took a narrow view that focused on speculation about what if something goes wrong over the concrete benefits that were recommended by 23 intervenors representing the broadest range of customer and stakeholder interest,” PNM spokesman Raymond Sandoval said in a statement. “We hope that the commission looks at all of the opinions of the parties, and not simply a single point of view.”

Avangrid and PNM said last month they would agree to additional conditions outlined by the hearing examiner, including commitments to corporate governance and other financial protection for customers.