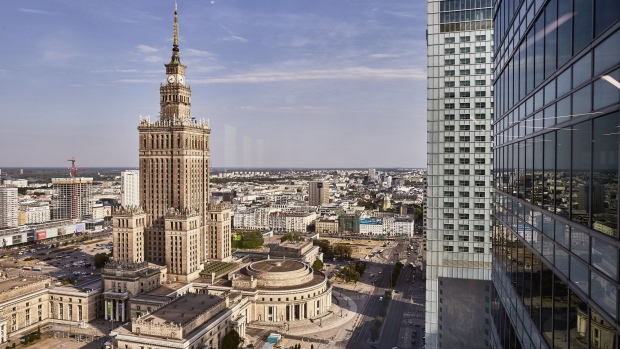 The Palace of Science and Culture, left, stands on the city skyline in Warsaw, Poland, on Monday, July 1, 2019. Poland's authorities put on a brave face as U.S. President Donald Trump called off a visit to Warsaw to commemorate the start of World War II because a big storm on the Atlantic was heading toward Florida. , Bloomberg

(Bloomberg) -- Poland is close to agreeing to a European Union directive that would implement a minimum corporate tax after the country won guarantees on another part of the global deal.

The government in Warsaw is ready to drop its objections as early as at the meeting of EU finance minister in Luxembourg on Friday, according to people familiar with negotiations. In return, Poland can expect to be granted a additional commitment on the implementation of the other part of the global deal that would make multinational companies pay more tax in the countries where they do business, the people said.

They asked not to be named because the talks are private.

The agreement would give a fresh impetus to last year’s deal, in which countries representing more than 90% of global economic output backed the implementation of a 15% minimum corporate tax on large companies, known as Pillar Two. The directive would introduced the measure across the 27-country bloc.

Finance Minister Magdalena Rzeczkowska told Bloomberg last week Poland may lose out on foreign investment if the minimum levy alone is introduced. The country was seeking to legally tie it with the so-called Pillar One of the deal, which aims to give governments more rights to tax the local operations of the world’s largest companies, especially digital giants.

The technical work on the required international treaty mechanism for the Pillar One is delayed and there is also uncertainty over whether the US Congress will ultimately back it.

The concession that Poland expects to receive by Friday will include a commitment that the EU will monitor and assess the progress on the implementation of Pillar One within the OECD. If it turns out to be insufficient by mid-2023, the bloc would start working on a separate directive that reflects this part of the global deal within the EU, the people said.

The final draft of the directive is still being completed and must be backed unanimously by member states. An official from Hungary’s ruling party on Monday raised objections to the adoption of the global minimum tax in the EU, saying it would hurt competitiveness.