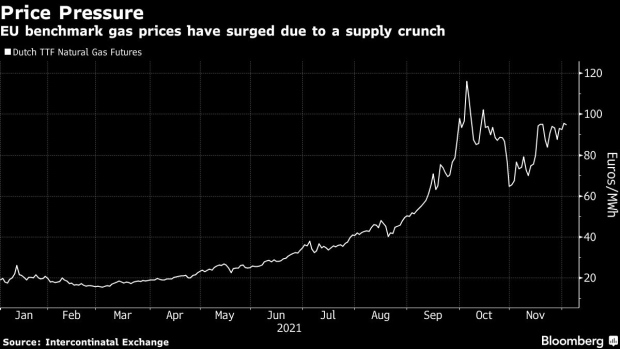 Natural gas prices in Europe could remain volatile for months, with Russia limiting supplies as it seeks approval for a controversial new pipeline to the region, according to Poland’s new climate minister, Anna Moskwa.

Russian gas giant Gazprom PJSC is awaiting European regulators to sign off on the Nord Stream 2 pipeline, which would provide fuel to the continent via Germany. The process could take months and is complicated by the possibility of U.S. sanctions.

While the government in Warsaw isn’t concerned about the possibility of blackouts this winter, Europe remains in the midst of a supply crunch with gas inventories unusually low. Benchmark prices on the continent have surged by almost 400% this year as higher demand has coincided with limited shipments. The region is also competing with Asia for liquefied natural gas cargoes.

Gazprom has repeatedly said it continues to meet all contractual obligations. The Russian producer declined to pre-book any capacity via Poland to Germany in December -- opting instead to rely on daily auctions -- though there are signs that Russia will maintain stable westward shipments for the time being.

“Gazprom doesn’t really need to halt supplies to cause a crisis,” Moskwa said. “It’s enough to limit flows and provide gas in an uncontrollable manner, not in line with our demand.”

She said the European Commission should investigate Gazprom’s activity for a possible breach of EU competition rules, echoing calls from lawmakers in the EU Parliament in September.

The Polish climate minister also called for a “broad reform” of the EU Emissions Trading System, which imposes pollution caps on around 12,000 manufacturers, power producers and airlines. Carbon prices in the cap-and-trade program surged to a record 79.98 euros per metric ton on Thursday, a gain of 144% so far this year.

Moskwa linked the spike to a rising share of financial investors in the market and said the EU should introduce measures to curb speculation. She criticized a report last month by the European Securities and Markets Authority on trading behaviors in the carbon market, saying it amounted to a description of the situation without diagnosing its causes. Poland will raise the issue at the next meeting of EU heads of government on Dec. 16 in Brussels.

“The current level of prices will not incentivize faster cuts by the industry or accelerate the green transformation, it will just make it more costly,” Moskwa said. “It seems the system reached such a level that it needs additional control mechanisms.”