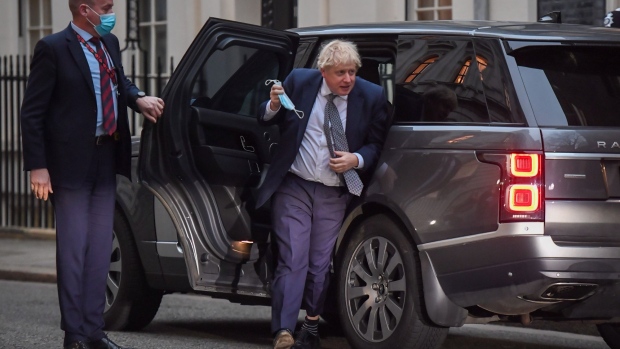 (Bloomberg) -- Boris Johnson’s premiership looked in grave peril when U.K. police -- facing public pressure to act -- began a formal probe into whether he and his team broke the pandemic laws they imposed on the country.

Yet days later, it appears Metropolitan Police Commissioner Cressida Dick’s sudden announcement on Tuesday has bought Johnson some breathing space. The question is if it’s already too late for him to use it to rebuild his standing and persuade ruling Conservative Party rebels not to try to oust him.

The moment of truth for Johnson was meant to arrive early this week. A civil servant tasked with investigating reports of alcohol-fueled gatherings in Downing Street during lockdown was said to be ready to deliver her findings, ending weeks of “waiting for Sue Gray” dominating the political discourse.

Her report was seen as potentially seismic because many Tory lawmakers were waiting for it before deciding whether to seek a change in leadership.

U.K. ‘Partygate’ Probe May Be Watered Down at Police Request

But the police intervention, after weeks of declining to investigate the claims, threw Gray’s plans into disarray. They asked her to make “minimal reference” to the events they have chosen to investigate, meaning she is effectively prevented from releasing her findings on the most serious allegations.

Though it is normal police procedure to try to prevent too many details entering the public domain ahead of an investigation, the Met’s approach has faced criticism as being overly controlling.

According to a person familiar with the matter, Gray still intends to submit her report to Downing Street, but in a way that complies with the Met’s request. When it is then published and Johnson makes a statement on it to the House of Commons -- possibly as soon as Monday -- it will likely be heavily redacted.

Faced with that prospect, Johnson’s political opponents have been quick to protest. The Liberal Democrat party said the week’s events carried the “appearance of an establishment stitch-up,” while Labour Party leader Keir Starmer accused Johnson of using the police as a “shield.”

Some members of Johnson’s party have also expressed fears the Tories could be tarnished if Gray’s findings are not revealed in full. Roger Gale, who has called for Johnson to resign, called it a “farce,” telling the BBC on Friday the prime minister’s office would breathe a “sigh of relief.”

In a regular briefing on Friday, Johnson’s spokesman, Jamie Davies, told reporters Downing Street had no influence over the timing of the Met’s involvement or on its impact on the publication of Gray’s report.

“It’s a matter for the investigations team to have the conversations that they’re having with the Met police,” he said. “We’re not privy to those conversations.”

During the days of negotiations between government officials and the police over what Gray can publish, Johnson has been using the time to try to shore up Tory support. That’s taken place in meetings and Whatsapp groups, accompanied by reports that key policies are now up for negotiation.

He has repeatedly declined to confirm a rise in payroll tax, which has divided Conservative MPs, would go ahead as planned in April. He’s also reconsidering proposals to slash sales tax on energy bills to help consumers with rising living costs, something he dismissed earlier in the month as a “blunt instrument.”

For Johnson, it’s been a chance to try to win back trust after after a hugely damaging period that began with his botched handling of an ethics probe and included a key parliamentary election defeat. According to some MPs, the effort has worked and a rebellion that looked dangerous last week lost momentum.

It would take 54 Tory MPs, or 15% of the total, to submit letters calling for his resignation to trigger an automatic no-confidence vote in his leadership. He would then need over 50%, or 180, to back him in a secret ballot to survive.

But while his recent charm offensive appears to have taken the sting out of the most immediate threat, the danger for Johnson is that it’s already too little, too late.

Inside No. 10, Boris Johnson’s Broken Team Tears Itself Apart

Even if he survives a confidence vote, it is far from clear whether he can win an outright general election victory in 2024, when the next national vote is scheduled. Johnson’s current prospects are a world away from the emphatic, 80-seat majority he enjoyed in 2019, when he took swathes of Labour’s former heartlands in northern England, with ambitions for a decade in power.

Johnson’s personal rating fell to its lowest last week since he became premier, according to pollster Ipsos Mori, with just 24% of respondents satisfied with the job he’s doing, compared with 70% who said they are dissatisfied.

“We’ve never had a past prime minister, that I can spot at least, whose political career has survived the next election after hitting numbers this low,” Chris Curtis, head of political polling at Opinium, said in an interview. “Hardly anyone trusts him to tell the truth,” he said. “There are really strong reasons to believe that it’s going to be very hard for him to come back from this.”

Johnson’s electoral prospects go to the heart of the calculation for Tory MPs, as they size up the government’s chances of winning next time and crucially, what the polling shows about their prospects in their own seats.

According to Jane Green, professor of British politics at Nuffield College, University of Oxford, public opinion is likely to fluctuate in the short-term but the bigger question is whether he can command the faith and trust he previously held.

Labour Reveals How It Will Attack Boris Johnson Over Party Probe

For the Conservatives, a repeat of Johnson’s 80-seat majority or even winning a secure majority “are now hugely debatable,” she said.

Attention in Westminster is now on when and how Gray publishes her report. A redacted version could give a short-term boost, and allow Johnson to continue trying to woo his MPs.

But the danger will still loom large, with a potentially more damaging police probe and a daunting poll deficit still hanging over him and his party.