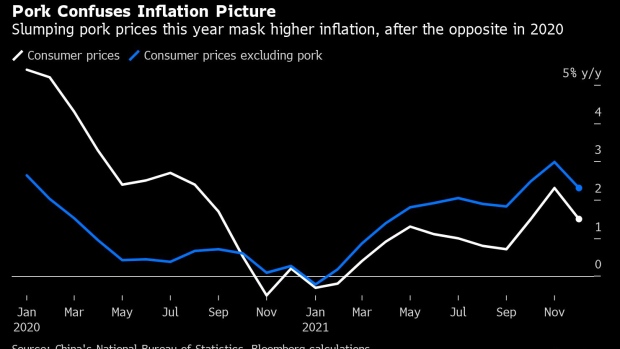 Shoppers browse pork at a fresh food market in Shanghai, China, on Wednesday, Nov. 3, 2021. China is facing soaring prices of some food items, such as vegetables, eggs and pork, which threatens to become a broader inflation problem. Photographer: Qilai Shen/Bloomberg , Bloomberg

(Bloomberg) -- A potential rebound in Chinese pork prices later this year is set to lift the lid on consumer inflation, complicating the central bank’s efforts to stimulate the economy.

After a brutal selloff over the past year, pork prices will gradually enter a new cycle of increases in 2022, according to a report in the state-backed China Securities Journal. Along with the effect of previous rises in commodity prices being passed on to consumer goods, more expensive pork will likely push up China’s consumer price index in 2022, the report cited analysts as saying.

China’s consumer inflation has been subdued over the past year or so, largely because of the outsized effect of falling pork costs, but that may soon change as the stock of pigs declines. Faster consumer inflation would constrain the ability of the People’s Bank of China to add more stimulus if needed later in the year to support the economy.

Hog prices will begin to climb from the second quarter as the supply of live pigs is expected to drop, according to Huatai Futures. Farmers will boost slaughter before Lunar New Year, a peak consumption season, and a backlog of imported frozen meat will also be shipped out, the Chinese brokerage said.

The number of sows fell in November from October for a fifth straight monthly decline, according to data from Shanghai JC Intelligence Co.

Even if wholesale prices don’t rise from the current level, as the year goes on the effect of the higher prices earlier in 2021 will disappear from the consumer price index, meaning that pork will stop dragging on consumer inflation. Without the 37% drop in pork prices in December, consumer prices would have risen 2.3%.