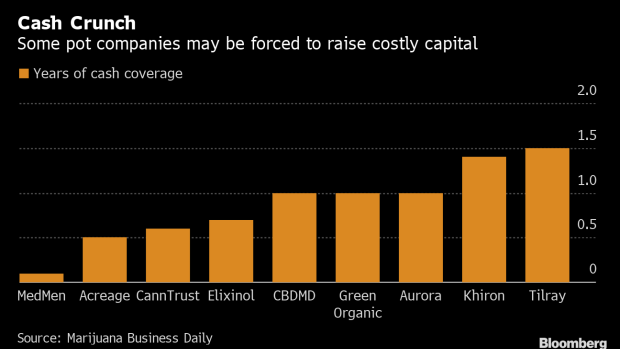 A marijuana leaf is displayed for a photograph at a Bonify grow facility in Winnipeg, Manitoba, Canada, on Wednesday, July 12, 2017. A year before recreational cannabis is expected to become legal in Canada, there\'s an explosion in companies cultivating the stuff. Some 51 enterprises have gotten the green light to grow pot, and 815 applicants are in the queue. Photographer: Trevor Hagan/Bloomberg , Photographer: Trevor Hagan/Bloomberg

(Bloomberg) -- The rout in pot stocks is taking its toll on companies’ ability to raise money, just when they need it most.

Hexo Corp. announced Wednesday that it will pay an annual interest rate of 8% on C$70 million of unsecured convertible debentures that will mature in three years.

It’s not a shock that Hexo has to pay more, as the company recently lost its chief financial officer, withdrew its 2020 guidance and delayed its earnings release. But it’s indicative of the broader troubles that are plaguing the cannabis sector as stocks have fallen by more than 50% on average since their March highs.

Green Organic Dutchman Holdings Ltd. said earlier this month that it’s been unable to secure traditional sources of financing “on acceptable terms” and is slowing down construction of its greenhouse in Valleyfield, Quebec, until it can raise the money it needs.

And there are likely to be plenty more companies in the same boat, according to Craig Behnke, equity analyst at trade publication Marijuana Business Daily.

A study of 30 pot firms’ operating cash flow, capital expenditures, balance sheets and debt payable in 2020 found that nine had one and a half years or less of cash on hand. These companies will likely “have to meaningfully alter their expansion plans, reduce their guidance or raise very expensive capital if they are going to continue on their path,” Behnke said in an interview.

Of the companies Behnke studied, MedMen Enterprises Inc. had the least cash coverage, followed by Acreage Holdings Inc. and CannTrust Holdings Inc. Hexo was in the middle of the pack with 2.2 years worth.