It was only a year ago that exuberance enveloped the marijuana industry. Legalization was spreading and the growth potential seemed boundless.

But that bubble has burst as the reality of a difficult regulatory landscape sunk in. Since March, stocks are down by about two-thirds. Capital markets have largely frozen for all but the strongest companies. And now a cash crunch is leaving some on the verge of going bust. Only, thanks to the illegal status of cannabis under U.S. federal laws, firms there are blocked from seeking protection in bankruptcy court.

The industry’s problems have become so dire that one senior executive at a large cannabis company predicts that as many as a dozen smaller companies may fail by the second quarter of 2020. The executive, who asked not to be identified and declined to name specific firms, said that in the past three months companies have been calling more frequently with urgent, last-ditch attempts to be acquired.

Some of those companies, which are both public and private, are two to four weeks away from missing payroll and none of them is an attractive takeover target, the executive said.

For U.S. firms, this poses an intractable problem: Bankruptcy is governed by federal law, which considers marijuana an illegal substance. This means they can’t get Chapter 11 protection from creditors or a centralized sale process. Without that, the result could be a state-by-state scramble by creditors for assets.

The U.S. bankruptcy trustee, which serves as a watchdog over the court process, “has taken a hard-line position on this,” said Sean Gordon, partner at Thompson Hine LLP. “It is incredibly difficult for a marijuana-related business to file and not get their case dismissed.”

In Canada, bankruptcy filings have already begun. Wayland Group Corp., one of the first Canadian cannabis companies to be awarded a cultivation licence in 2014, filed for protection from creditors earlier this month. DionyMed Brands Inc. filed for receivership in October when a creditor demanded immediate payment of a $25-million loan, and Ascent Industries Corp. has been reorganizing under court supervision since March.

While the smallest players are most at risk, better-known companies are also running low on cash. Los Angeles-based MedMen Enterprises Inc. said last week it reduced corporate staff by more than 40 per cent. It also issued US$27 million of shares at 43 cents US each, 14 per cent below the stock’s Dec. 10 closing price.

In Canada, Green Organic Dutchman Holdings Ltd. said Friday it’s received a 13 per cent first-lien credit facility from private lender Maynbridge Capital, backed by all of the company’s assets. TGOD, as it’s known, had previously said it was unable to secure traditional sources of financing on acceptable terms, while its cash pile dwindled to $24 million as of Sept. 30, down from $214 million at the beginning of the year. 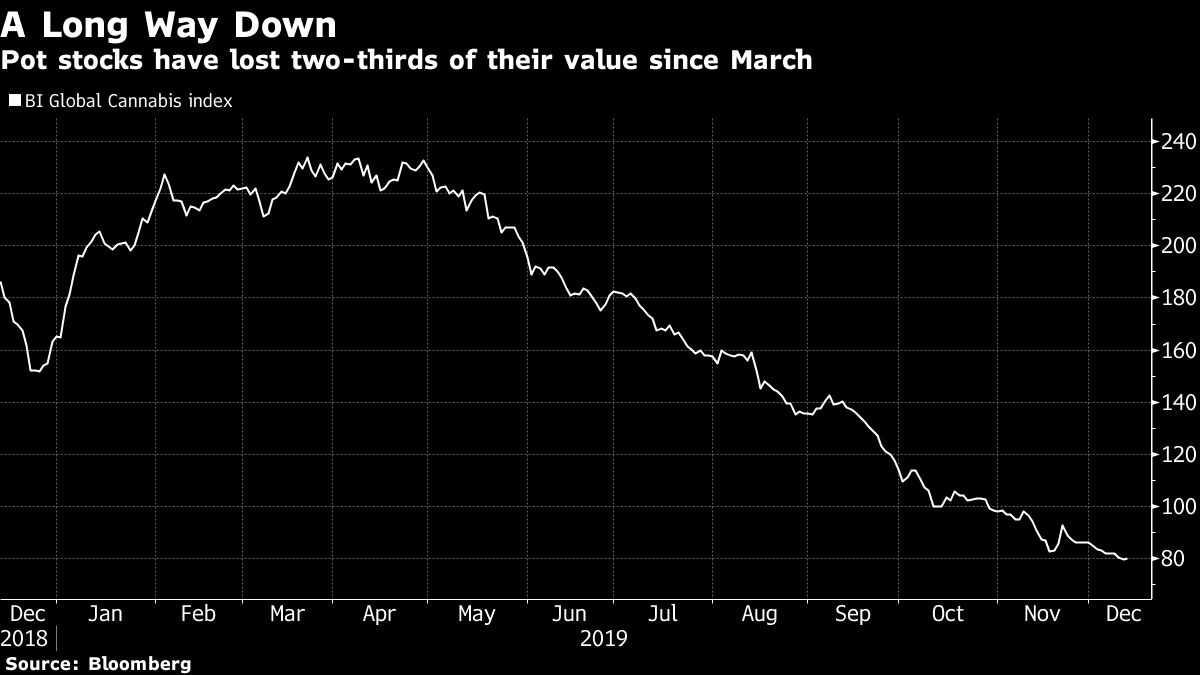 Cheaper debt is gradually becoming more available to pot companies, but it’s mostly flowing to those that are already turning a profit.

For U.S. companies, options for capital are limited from the outset since traditional U.S. banks — hamstrung by federal law — will rarely do business with them. At the same time, the federal tax code bars cannabis companies from taking tax deductions from normal business operations.

In states such as California and Oregon, where laws allow for unlimited licences, companies face particular risk of distress because of heightened competition, said Josh Horn, law partner at Fox Rothschild LLP in Philadelphia.

“Thousands are competing for smaller pieces of the pie,” he said. “You have flooded markets and price depression.”

Rather than seek relief through traditional bankruptcy, distressed cannabis companies operating in the U.S. will have to follow state-specific receivership or wind down proceedings, Horn said.

When California and Oregon legalized marijuana, they added unique provisions that give cannabis creditors leeway to take over business operations or sell off inventory. Other states like Pennsylvania didn’t include such provisions in their marijuana laws, Horn said, making it harder for creditors to take ownership of assets.

Cannabis companies with operations in multiple states, meanwhile, would have to follow separate wind-down proceedings in every state in which they own assets.

An alternative may be at hand for U.S. cannabis companies that trade on Canadian stock exchanges.

“We’re actively exploring the use of Canada as a jurisdiction for U.S. operators who have businesses in Canada,” said Michael Smith, a New York-based partner at the Greenspoon Marder LLP law firm. He’s meeting with Canadian lawyers and accounting firms to discuss the possibility of U.S. companies filing for bankruptcy in Canadian courts.

Ultimately, the distress could be good for the industry, said Vivien Azer, analyst at Cowen & Co.

“Over time, having a shakeout and seeing some companies go bankrupt is going to be very helpful to the industry,” Azer said. “We need to see the marketplace get cleaned up.”