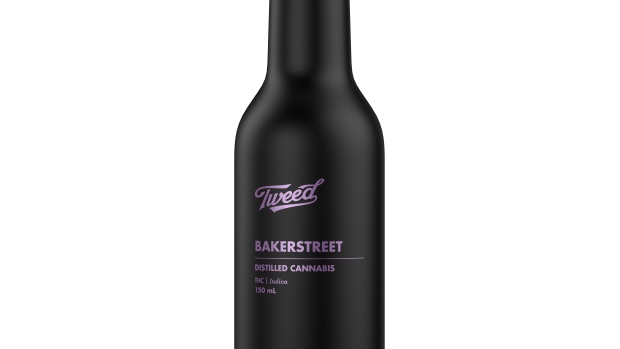 Canopy Growth Corp. expects to have about 30 next-generation pot products on the market by the end of the year, including distilled cannabis, as shown in this handout image, to be used in mixed drinks. Handout by Canopy Growth Corp. via The Canadian Press

Canopy Growth Corp.’s plan to launch cannabis-infused drinks in the U.S. marks the latest attempt by a marijuana company to position itself for a possible weed beverage boom.

The Ontario-based company has licensed rights to its cannabis drinks line in the U.S. to Acreage Holdings Inc., which is expected to soon provide more details. The move comes at an opportune time -- the pot industry is hopeful for U.S. legalization as soon as 2021 and Americans are drinking less alcohol during the coronavirus pandemic.

With less beer, wine and booze being served at restaurants, bars and sporting venues, total U.S. volume is estimated to fall 1.8 per cent this year and it could take past 2024 to recover, according to IWSR, a drinks market researcher. That could prove advantageous for companies aiming to win over consumers searching for an alternative buzz.

Previous studies show cannabis overall has no direct impact on sales of alcohol in the states where it is legal, according to IWSR. The legal market is still largely in its infancy and not yet widely available. But in certain occasions it can be a threat -- like when consumers are looking to unwind or feel creative. Drinks infused with THC are designed to have a psychoactive or intoxicating effect whereas CBD drinks target relaxation.

By 2024 the cannabis drink market is expected to reach US$4 billion in U.S. retail sales, according to cannabis researcher Prohibition Partners. Long term, that could pose a risk to the alcohol industry, which has been trying to adapt to more health-conscious consumers with products such as no-alcohol beer.

“The functional benefits touted by some better-for-you no-alcohol products would likely align with CBD-infused, no-alcohol products,” said Brandy Rand, IWSR’s chief operating officer of the Americas, in an email. “This is likely why we are seeing more products in this category globally, but still at a smaller scale.”

In its quarterly results on Monday, Canopy posted a overall decline in recreational pot sales from COVID-19 store closures, but noted the strength in cannabis drink demand. Beverage production more than doubled from June to July and is expected to nearly double again in August to keep retailers fully stocked. The company’s manufacturing facility could reach capacity much sooner than expected.

That’s a positive sign for Constellation Brands Inc., the maker of Corona and Modelo Especial beer, which holds nearly a 40 per cent stake in Canopy. It, like other big brands, has been monitoring developments in the cannabis drinks market closely. Anheuser-Busch InBev NV and Molson Coors Beverage Co. have their own partnerships to make CBD-infused beverages, while Coca-Cola Co. and Pernod Ricard SA have also expressed interest. Yet, startups are primarily responsible for innovation, according to a Prohibition Partners report. Several groups such as Cannabiniers and NewAge Inc. in the U.S. have “big ambitions” to disrupt the overall beverage market, the report said.

“A number of brands that have been in the market for a long time have established themselves as core brands within the states in which they are allowed to operate,” the report said. “In the event of federal legalisation and regulation in the US, these brands will need to find a way to compete against larger multinationals, and will have to look to [unique selling propositions] and strong brands in order to maintain their position.”

Competition will be stiff.