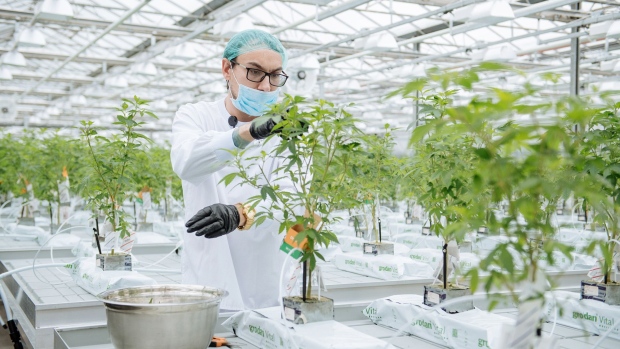 A grow technician manicures a plant in the propagation and mothering room at a marijuana production facility in Fenwick, Ontario, Canada. , Photographer: Galit Rodan/Bloomberg

(Bloomberg) -- Suddenly, the U.S. Senate is willing to talk about pot.

Rather unexpectedly, the Senate Committee on Banking, Housing and Urban Affairs will hold a hearing on cannabis banking Tuesday. This marks the first time the Republican-controlled Senate has agreed to examine the so-called SAFE Act, which would allow banks to offer services to pot companies in compliance with state law.

“On the legislative front, it is evident that the politics of cannabis is undergoing a transformation that is almost unparalleled in Washington,” Cowen & Co. analyst Jaret Seiberg said in a policy outlook call with reporters last week. “This has gone from an issue that Capitol Hill did not take seriously to one that is driving legislation and elections, and this all happened in the last two years.”

While Seiberg doesn’t believe cannabis will be legalized until after the 2020 election, he said narrower measures like the Secure and Fair Enforcement Banking Act could be implemented before then. That would be a clear signal to the industry that politicians are increasingly open to federal legalization.

However, the growing optimism around U.S. policy changes isn’t helping cannabis stocks. The sector has taken a beating in recent weeks, with the BI Global Cannabis Competitive Peers index down almost 9% since the beginning of July and nearly 28% since late April.

Issues on both sides of the border are weighing on company shares. In Canada, Bruce Linton’s ouster as co-chief executive officer of Canopy Growth Corp. singaled stakeholders are growing impatient about the lack of profitability in the sector, while regulatory issues at CannTrust Holdings Inc. have damaged the industry’s credibility.

In the U.S., a flurry of deal-making has raised antitrust concerns at the Department of Justice, which has requested additional information about pending deals by MedMen Enterprises Inc., Cresco Labs Inc. and Cannex Capital Holdings Inc. It’s likely Curaleaf Holdings Inc. will face the same scrutiny in its $875 million acquisition of Chicago-based Grassroots Cannabis, but management said they’re “highly confident” the transaction will close, according to Andrew Kessner, analyst at William O’Neil & Co.

“We believe a major player like Curaleaf has carefully assessed the potential issues that could potentially block the deal, and that their decision to expand into key new states” with a large deal will help mitigate broader concerns about antitrust risks, Kessner wrote in a note.

The perceived regulatory risk has caused some investors to move to the sidelines, but it appears the Department of Justice is undergoing an “education process” in cannabis as opposed to finding objective issues with the deals, said Canaccord Genuity analyst Matt Bottomley.

As a result, “positive commentary, or the closing of a material acquisition, could represent a significant positive valuation catalyst for all U.S. players,” he said.

The bigger regulatory concern may actually be at the state level, as states are “becoming increasingly aware of -- and averse to -- the idea of ‘big marijuana’ dominating a new industry,” said Kessner. This may lead to more restrictive legislation and regulatory frameworks, potentially limiting growth potential.

All this is beginning to damage sentiment about the industry more broadly. Horizons ETFs Management Canada, provider of the Horizons Marijuana Life Sciences Index ETF, found that only 36% of financial advisers are bullish on marijuana equities, down from 47% in the second quarter, while 58% of retail investors are bullish, down from 70%, according to their survey.

“It may still be too early to say that the marijuana sector’s post-legalization afterglow has come to an end, but it’s becoming apparent that it has lost some of its ‘shine,’ particularly among hard-won advisers,” said Horizons CEO Steve Hawkins.

The Weed Industry Is Even Less Diverse Than Banking and Tech