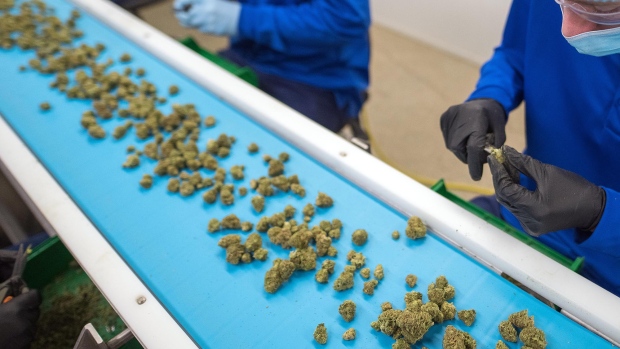 When Canopy Growth Corp. (WEED:CT) announced a plan to acquire cannabis researcher Ebbu Inc. for $330 million last October, it touted the company’s intellectual property as the primary reason for the deal, mentioning it five times in the short press release.

A year later, Canopy is struggling to turn that intellectual property into patents. One of Ebbu’s first applications was rejected twice by the U.S. Patent and Trademark Office. When it was then narrowed significantly in a renewed attempt at approval, it was rejected a third time.

The difficulties Ebbu has faced in securing patents point to a broader issue in the pot sector, where many companies tout their intellectual property but few have successfully obtained exclusive rights to their inventions. For young companies, it will be difficult to prove they were first with an invention in a sector that’s existed illegally for decades. Those companies that are granted patents could face years of lawsuits.

“This is going to be a problem for a generation,” said Dale Hunt, founder and senior attorney at San Diego-based Plant & Planet Law Firm, which specializes in cannabis patent law. “There’s going to be a cloud over how valid the patents are, and that’s definitely going to translate into litigation.”

In order for an invention to be granted a U.S. patent, it must meet several criteria: it must be patentable subject matter -- for example, you can’t patent a natural phenomenon -- and it can’t have been disclosed to the public more than a year before. It must also be novel and non-obvious, and the invention needs to be explained in a way that others can emulate.

In Ebbu’s case, it first sought in 2016 to patent combinations of purified compounds found in the cannabis plant. That application was rejected on multiple grounds: for trying to patent a natural phenomenon, for not being new, and for being obvious. It was then amended to focus on one specific combination -- the little-known cannabinoid CBC and a terpene called alpha-bisabolol -- but it was rejected again for being obvious, as well as too vague in how it was claimed.

While Canopy is free to continue pursuing the patent, the rejection is significant because it’s one of just nine patent families in Ebbu’s publicly available portfolio, according to an analysis done by Hunt.

However, patent applications aren’t published until 18 month after they’re filed, meaning its real portfolio could be significantly larger. Ebbu says on its website that it has filed more than 40 cannabis-related patents representing over 1,500 inventions.

“The patent portfolio from the Ebbu acquisition continues to move forward, and like all patent portfolios, it is in flux,” Canopy spokesman Jordan Sinclair said in an email. “While the patent filings did factor into the decision to acquire Ebbu, we also greatly valued Ebbu’s R&D advancements and capabilities and how they complemented our own.”

Patent rejections aren’t unique to the cannabis sector but there’s a race on to secure intellectual property in a bid to appeal to investors. That’s led to some questionable filings, according to several cannabis lawyers.

“There’s no real barrier to filing one other than drafting it and paying the fees,” said David Wood, a Calgary-based partner at Borden Ladner Gervais LLP focused on cannabis patents and intellectual property. “There’s a lot of noise and probably a lot of stuff that’s been filed that doesn’t make sense.”

There are several areas where patents could be secured in the cannabis space, including formulations, extraction methods, growing techniques, genetic modifications of the plant, therapeutic uses and consumption devices, according to Brad White, intellectual property partner at Toronto-based Osler, Hoskin & Harcourt LLP.

“It’s almost like we’re seeing the birth of a new subset of the pharmaceutical industry, with the research and money that’s behind it now,” White said.

When deciding whether to grant a patent, officers review what’s known as “prior art,” or evidence that indicates an invention already exists. This would include things like academic publications or well-documented commercial activity.

“But in a heretofore illegal industry, there wasn’t a lot of academic publications or patenting or well-published commercial activity,” Hunt said. “It’s left a just few tiny little fossil footprints in the record instead of having a rich, diverse literature.”

A legal company could patent what it believes is a new method for vaping cannabis, for example, and then someone discovers that a similar invention already existed 15 years ago in the black market and challenges it in court. Even if the patent holder eventually wins the court case, it could prove costly and disruptive in the meantime.

The end result may be more amalgamation among pot companies as they seek to protect themselves by building robust patent portfolios, according to White.

“Having those patents is huge because you can either use them as a shield to protect what you’re doing or you can use them as a sword to go after those that are trying to rip off your technology,” he said.

Whatever happens, White said one thing is certain: “There’s going to be a lot of really interesting litigation.”