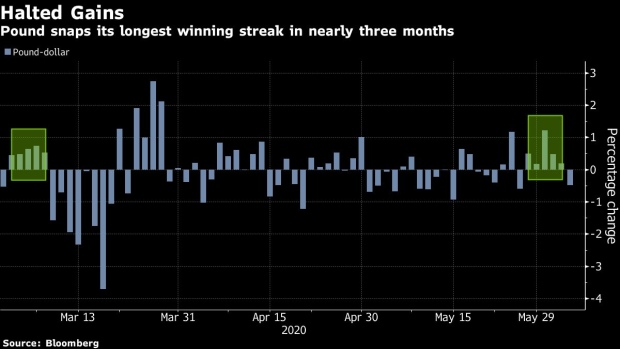 British one pound coins stand stacked in this arranged photograph in Danbury, U.K., on Monday, March 23, 2020. The pound rose, boosted by broad dollar weakness, after the U.K. government banned all unnecessary movement of people for at least three weeks in order to reduce the spread of coronavirus. Photographer: Chris Ratcliffe/Bloomberg , Bloomberg

(Bloomberg) -- From saber rattling with China to fresh fear about Brexit, a uniquely British set of risks is taking the shine off the pound.

Sterling snapped its longest winning streak in nearly three months and slipped against almost all its Group-of-10 peers as the U.K. careens toward a row with Beijing over Hong Kong.

The banks’ move to support China came as a reminder of the strength of the U.K.’s business links with Hong Kong according to Jane Foley, the head of currency strategy at Rabobank in London.

“This is an issue that certainly needs to be watched closely,” she said.

Johnson has said he will give as many as 3 million Hong Kong residents the chance to seek refuge and a new life in the U.K. if China presses ahead with the legislation.

The U.K. is also taking steps to exclude Huawei from its fifth-generation mobile networks by lining up potential replacements, another move likely to anger Beijing.

It adds a new dimension to the international political uncertainty in London, where the government is already at odds with the European Union over trade, and the next round of talks set to end on Friday.

Brexit fears were highlighted this week when the central bank told U.K. lenders to prepare for a no-deal scenario when the transition period expires in December.

As the pound’s wider boost from a weaker dollar fades, further clouds are gathering with talk of negative interest rates from the Bank of England as the U.K. grapples with what could be the worst recession in 300 years.

“Risk appetite is easing, the market is reflecting on the tightening Brexit timetable following the BOE warning,” said Jeremy Stretch, head of G-10 currency research at Canadian Imperial Bank of Commerce in London.

He also pointed to concern about further coronavirus infections, not least among lawmakers, adding “Covid in Parliament is not a ‘good look.’”

That could also add to doubts about the pound’s resilience in recent days, with a lack of signs of worsening relations at the Brexit talks enough to keep investors upbeat.

Sentiment on sterling is at its least bearish since mid-March, according to options, while implied volatility shows no real concern about the month-end deadline to extend the transition period.

But as its rally fades, attention could soon turn to the need for progress between London and Brussels.

For Rabobank’s Foley, that is likely to be the next focus. “I would put Brexit as the bigger issue for the pound near-term,” she said.