The biggest news from Jerome Powell’s congressional testimony last week may not have been the one that moved markets and grabbed the headlines.

While Powell’s comments on Capitol Hill about the current outlook cemented expectations for an interest-rate cut this month, he also acknowledged for the first time publicly that officials have potentially tightened monetary policy too much because they underestimated shifts in the U.S. economy.

That admission carries major implications. The central bank may cut not just this month but also later in the year to prolong the expansion and test the limits of labor market slack. It may also benefit President Donald Trump, who’s slammed the Fed for raising rates in 2018 and will be running on his economic record as he seeks reelection next year.

“The biggest news is that Powell has made a major a concession about a policy error over the past four years,” said David Beckworth, a senior fellow at the Mercatus Center at George Mason University in Virginia. “The discussion now is: What does it mean moving forward? A new regime or more rate cuts?’’

Powell’s comment that the rate of unemployment that doesn’t cause inflation is “substantially” lower than officials’ previous estimates suggests policy was tightened too fast and too far. In March 2018, Fed officials estimated the longer-run jobless rate at 4.5 per cent and the interest-rate level required to keep it there at just under three per cent. Last month, those projections had dropped to 4.2 per cent and 2.5 per cent.

Even so, the Federal Open Market Committee’s pivot to easier policy after hiking four times in 2018 has confused some Fed watchers and raised questions about how independent the central bank really is from politics, coming amid sharp attacks by Trump.

“I am kind of curious about what he is seeing that the rest of us aren’t,’’ said Drew Matus, chief market strategist at MetLife’s portfolio unit. Stephen Stanley, chief economist at Amherst Pierpont Securities LLC, was more blunt: “Chairman Powell has a ridiculously negative view of the current situation,’’ he said in a note to clients.

The U.S. economic expansion became the longest on record in July with low unemployment, low inflation and stocks trading at record highs. But it has also experienced multiple shocks, from trade tensions that sap business investment to corporate tax cuts that could boost productivity in the years ahead.

Powell took the job in February 2018 with a gradual Fed tightening cycle already underway. Officials had lifted off from crisis-era rates near zero and were starting to shrink their super-sized balance sheet.

The Fed called it “normalization’’ to draw a line under the emergency policies officials had deployed during the Great Recession. But the way Powell describes it, it is more like exploration. The economy is changing and the right policy setting is difficult to discern.

Powell described that challenge last August in his speech at the annual Fed symposium in Jackson Hole, Wyoming: “The FOMC has been navigating between the shoals of overheating and premature tightening with only a hazy view of what seem to be shifting navigational guides,” he said.

His arguments last week for cutting rates were both cyclical and structural, meaning they were related to the regular ups and downs of growth as well as deeper shifts in the economy. 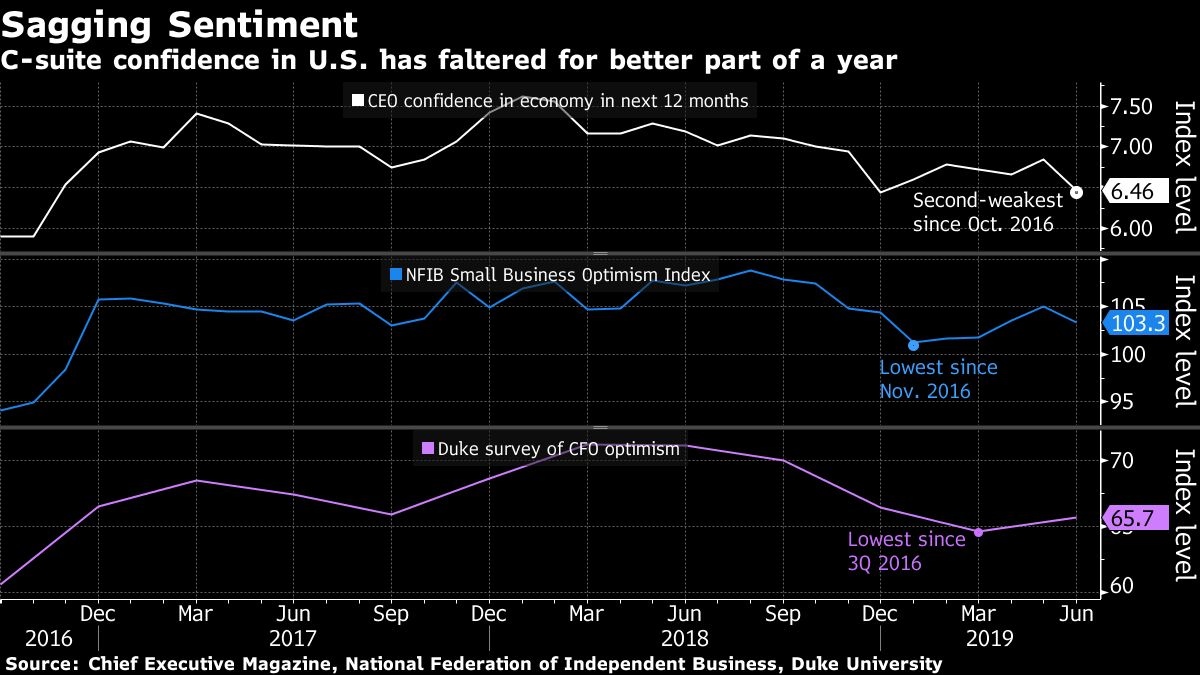 The cyclical reason is that rising trade tensions combined with a global slowdown seem to be hurting U.S. business investment. Powell said consumer spending is holding up, but the Fed’s concern is that a paralysis in business sentiment could stall hiring.

The counter-story is that economic growth is simply slowing somewhere toward its long-run rate. With low unemployment rates and GDP still forecast to grow at a reasonable pace, economists -- and several Fed bank presidents -- have a difficult time seeing any urgency to cut rates.

It’s “hard to make a case for stepping on the gas,’’ Richmond Fed President Thomas Barkin said at a conference in Idaho on Thursday.

But Powell’s structural narrative suggested that something is changing in his own view about policy. It’s also why he kicked off a strategy review this year which is examining the best way to pursue the Fed’s goals of two per cent inflation and maximum employment.

During testimony before the House Financial Services Committee on Wednesday, New York Representative Alexandria Ocasio-Cortez -- the freshman Democrat and darling of progressives -- asked Powell if the Fed had missed its previous estimates of full employment. The question was critical because such estimates feed into standard formulas on the appropriate policy rate.

While that rationale holds up, there were plenty of signals that investors and businesses had similar worries about growth in the fourth quarter and yet the Fed still went ahead with an interest-rate hike.

“If they had it to do over they wouldn’t have raised rates’’ in December, former Fed governor Laurence Meyer said.