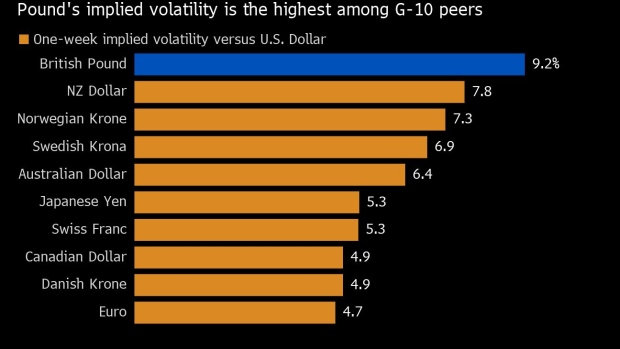 A pedestrian holds an umbrella, featuring the design of the European Union (EU) flag, as he shelters from the rain in City of London financial district in London, U.K., on Monday, Aug. 19, 2019. The European Central Bank blasted banks for slow-walking their Brexit preparations, telling them to move additional staff and resources to the European Union in case Britain leaves without a deal on Oct. 31. Photographer: Hollie Adams/Bloomberg , Bloomberg

(Bloomberg) -- The cast of characters contributing to sterling’s dizzying volatility keeps on getting bigger, leaving investors hooked on every episode of the Brexit drama.

This week was no exception: As most City workers were already headed for home on Thursday, a report suggesting European Commission President Jean-Claude Juncker had talked up the chances of a Brexit deal sent the pound flying to a two-month high against the dollar.

Then it was the turn of Simon Coveney, Ireland’s foreign minster, to take center stage. He voiced doubts the next day that an accord was close, taking the edge off the rally, and casting a shadow over the longest weekly winning streak since January for the Bloomberg index tracking sterling.

Sentiment toward the U.K. currency may be improving, but more plot twists are imminent. The spotlight will be back on Boris Johnson early next week, when the U.K. prime minister will have to respond to the Supreme Court’s ruling on his suspension of Parliament. Attempts to second-guess the decision of 11 unfamiliar judges -- and the reaction to their ruling -- will confront the PM with more volatility and provide a reminder of the risks on both sides of sterling’s current valuation around $1.25.

For some, the overall chances of a chaotic Brexit continue to diminish. The significance of the court ruling may be diluted after Parliament had time to legislate against a no-deal Brexit before it was suspended.

“Investors are coming round to the idea that the pound and U.K. assets are attractive,” said Koon Chow, a strategist at Union Bancaire Privee in London. “There is no doubt we have a tense week ahead of us, with doubts around any ‘plan B’ from Johnson if the suspension were ruled to be illegal. But the better strategy is to buy the pound if it dips.”

The sheer proximity of the Oct. 31 deadline is, in itself, a sharp reminder of the potential downside risks. Ken Dickson, investment director for currencies at Aberdeen Standard Investments, warns of “many paths to a no-deal scenario,” and expects “a sterling fall of between 5% and 10% on a trade-weighted basis” under such circumstances. On the other hand, he points out that any Brexit deal could lift it by between 10% and 15%.

Against the euro, sterling has rallied more than 5% after trading at some of its weakest levels in three years in August, pushing to 88 pence this week. Analysis from UBS Wealth Management argues that near-term Brexit risks have been “overpriced,” with Dean Turner, an economist in the U.K. investment office, expecting the deadline to be extended.

“We still advise being nimble on sterling though,” he warns.

The flavor of the analysis matches recent spice added to perceptions of the pound by Mark Carney, the Governor of the Bank of England. He compared sterling to an emerging market currency, such is the extent of its political exposure and volatility. As it held U.K. rates this week, the Monetary Policy Committee warned of the economic dangers of further Brexit uncertainty.

It all leaves Aberdeen Standard neutral overall on sterling, a long-standing position it reconfirmed at at a meeting of its Global Investment Group earlier this month. The firm, which manages over 500 billion pounds ($625 billion), says the recent rally has been driven by “very short-term traders” and that “real money and corporate” investors “remain very cautious.”

And a higher level of implied volatility for one-month sterling contracts relative to those for one week show any price swings caused by the coming court ruling may be just a curtain-raiser. More actors are bound to have their say on sterling’s fate before the next summit of EU leaders on Oct. 17, with plenty more tension to come before the final denouement.

--With assistance from Anooja Debnath.

To contact the reporter on this story: Michael Hunter in London at mhunter72@bloomberg.net

To contact the editors responsible for this story: Paul Dobson at pdobson2@bloomberg.net, Anil Varma