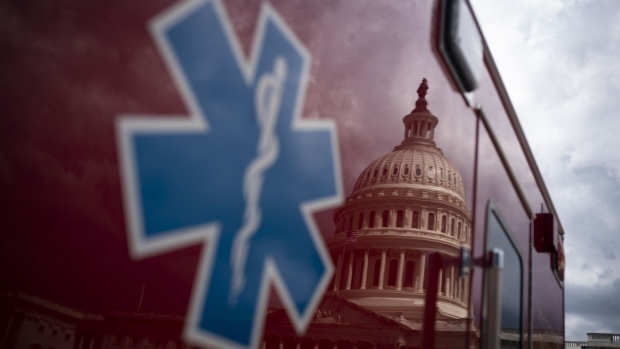 The U.S. Capitol is reflected on an ambulance in Washington, D.C., U.S., on Thursday, April 9, 2020. Photographer: Al Drago/Bloomberg , Bloomberg

Buyout firms were largely excluded from tapping the federal bailout money as the coronavirus pandemic prompted shutdowns. Yet a trove of data from the Paycheck Protection Program made public this week lists millions of dollars in loans to medical and dental practices that work in tandem with ventures controlled by private equity -- setting up those investments to benefit too.

Abry Partners, Prospect Hill Growth Partners and Gauge Capital are among private equity firms with portfolio companies that partner with medical practices that the government says took loans. Representatives for the investment firms didn’t respond to messages and phone calls seeking comment on whether they gained from the injections.

It’s particularly striking that the cash-rich world of private equity could get backdoor taxpayer support for investments in health care that have concerned lawmakers and government officials. Buyout firms have pumped more than $10 billion into bets on medical practices over the past five years, transforming the financial workings of clinics focused on specialties such as women’s health, dermatology, urology and gastroenterology.

Such partnerships are one of several channels that steered PPP money toward the Wall Street firms, people close to the private equity industry have told Bloomberg -- though until now few of the potential recipients have been publicly named.

The data trove unleashed a flurry of news reports early this week identifying scores of hedge funds, lobbyists and other politically connected enterprises that tapped PPP aid. But tracking the flow of money toward private equity firms is a multi-step process requiring a close look at their many portfolio companies and related entities.

Though PPP data show money went to medical practices associated with private equity ventures, it doesn’t specify how it was spent from there. Notably, some borrowers named in the trove publicly disputed receiving the loans or said they returned them.

Health-care companies backed by private equity investors also got grants and took loans from the U.S. Department of Health and Human Services, borrowing at least $1.5 billion from HHS, Bloomberg reported in June.

Ironically, state regulations aimed at preventing buyout funds from getting involved in clinical operations set the stage for the PPP relief.

Laws in many states bar investors from directly owning dental or medical groups. To work around that, funds own separate entities that take over clinics’ office functions, handling administrative tasks like payroll, and ordering supplies and equipment. Bailout money for a medical practice can ultimately end up helping both sides.

Oliver Street Dermatology Management, a physician group affiliated with Boston-based Abry, got a loan from the SBA’s program of $5 million to $10 million, according to the data released on Monday. New Jersey Urology, which was formed by Prospect Hill, and Comprehensive Eyecare Partners LLC, a vision group backed by Gauge Capital, both received $2 million to $5 million of taxpayer money.Some dental groups backed by investors applied for separate loans for different offices. An office in Long Island, New York, affiliated with Pure Dental Brands, a service organization backed by Heron Capital, received a loan of between $350,000 and $1 million, according to the government’s data. So did Redwood Dental of Georgia, a group affiliated with Silver Oak Service Partners, a private equity firm based in Evanston, Illinois.

Oliver Street, which operates under the brand U.S. Dermatology Partners, declined to comment. None of the other borrowers responded to messages seeking comment.