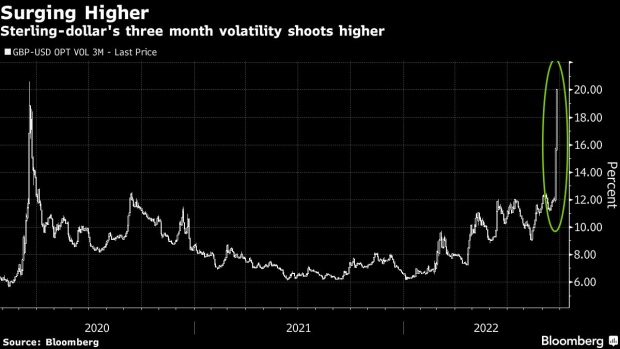 British one pound coins sit on top of a collection of U.S. one dollar bills in this arranged photograph in London, U.K., on Monday, Aug. 5, 2019. The pound will tumble to the lowest level since 1985 if the U.K. leaves the European Union without a deal, a prospect that looks more likely now than six months ago, according to a Bloomberg survey of analysts. Photographer: Chris Ratcliffe/Bloomberg , Bloomberg

(Bloomberg) -- It is looking more and more likely sterling will fall to parity against the dollar this year based on option market pricing.

Sterling-dollar implied volatility suggests there is a 60% probability spot will hit 1.00 before the end of this year -- based on spot trading at 1.0552 -- compared to 32% on Friday. The currency pair plunged to a record low of 1.0350 Monday in Asian trading after Kwasi Kwarteng, the new Chancellor of the Exchequer signaled more tax cuts might be in the pipeline.

The moves comes after the British government announced Friday the most radical package of tax cuts since 1972, which raised concerns from investors and economists the fiscal stimulus will drive the country’s debt to unaffordable levels and further fan inflation.

Former Treasury Secretary Lawrence Summers was one of the most vocal critics to attack newly installed UK Prime Minister Liz Truss’s economic policies, telling Bloomberg Television’s “Wall Street Week” the changes are creating the circumstances for the pound to sink past parity with the US dollar.

Sterling was already under pressure after the Bank of England last week decided to raise rates by only 50 basis points compared to Federal Reserve’s 75 basis points. Adding to negative sentiment towards the pound are worries about UK inflation, which is seen peaking at over 10%, record low consumer confidence and survey data suggesting both the manufacturing and service sectors are in contractionary territory.