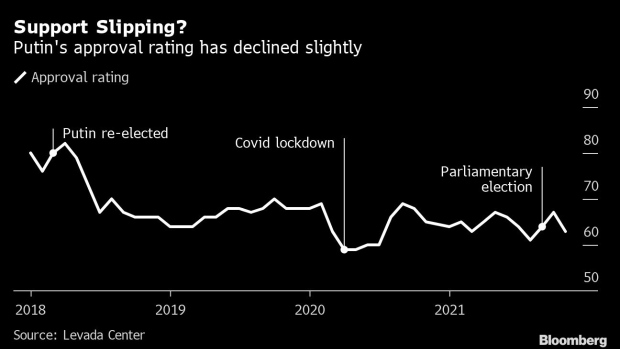 (Bloomberg) -- President Vladimir Putin’s approval rating slipped four percentage points to 63% in November as Russia experienced record levels of Covid-19 deaths and amid rising tensions with the West over a possible conflict with Ukraine.

The fall in Putin’s rating followed a rise of six percentage points over the previous two months, according to data published Thursday by the independent Levada Center pollster. Its survey of 1,603 people in 50 of 85 Russian regions was conducted Nov. 25 to Dec. 1.

While Putin’s approval rating enjoyed a bump after many Russians received supplementary payments prior to September’s parliamentary elections, “now it seems to be returning to a kind of norm,” said Levada Director Denis Volkov.

Putin’s rating hit its lowest level since he first became president in 2000, at 59%, in spring last year, when Russia went into lockdown in response to the spread of Covid-19, triggering a sharp economic contraction. Cases surged again in recent months, prompting the Kremlin to declare a week of non-working days in early November and many regions to impose stricter measures as deaths remain near record levels.

The Russian government has declared Levada Center a “foreign agent” under legislation that’s been widely criticized for pressuring critical voices. Levada said it disagrees with the designation and has tried to fight it in court.