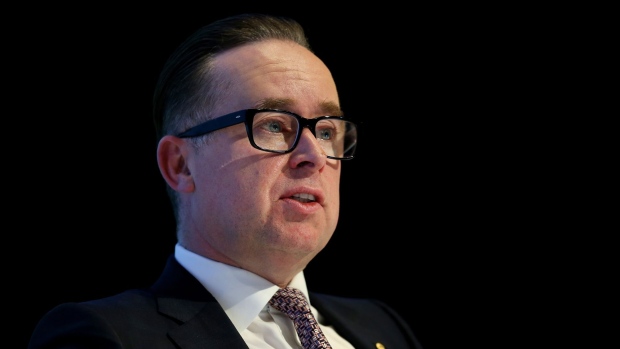 An Airbus SE A380 aircraft operated by Qantas Airways Ltd. approaches to land at Sydney Airport in Sydney, Australia, on Thursday, Feb. 21, 2019. Qantas' international business is bearing the brunt of higher fuel costs, which are shredding the division's profit margin. , Bloomberg

(Bloomberg) -- Qantas Airways Ltd. expects all of its Airbus SE A380s to return to the skies, a signal of confidence that demand for global air travel will recover and make the superjumbo viable again.

“We think we will reactivate all of the A380s. We spent a lot of money on them,” Qantas Chief Executive Officer Alan Joyce said at a CAPA Live virtual conference Wednesday. “Once demand is there, they’re going to be good aircraft.” The Australian airline grounded all 12 of its four-engined behemoths in June, saying they’d be useless for at least three years.

The collapse of international air travel during the pandemic had looked set to hasten the demise of the A380 as airlines switched to smaller planes. Deutsche Lufthansa AG has warned that its A380s may never fly again and Air France-KLM said last year it would phase its fleet out early.

Joyce is more upbeat on the world’s largest jetliner, saying Wednesday the speed of vaccinations in the U.K. and the U.S., both major markets for Qantas, bode well for a rebound in passenger traffic on those routes. Emirates, the biggest A380 customer, has said its fleet could return next year after vaccines have rolled out globally.

Hopes of an aviation recovery have been repeatedly dashed by infection flareups. While Joyce reiterated that broad international travel is unlikely to reach pre-pandemic levels until 2024, he stuck to a plan to restart almost all of Qantas’s overseas routes from the end of October, even though Australia’s own vaccination program has been delayed beyond that date.

Qantas Aims to Restart Most International Flights in October