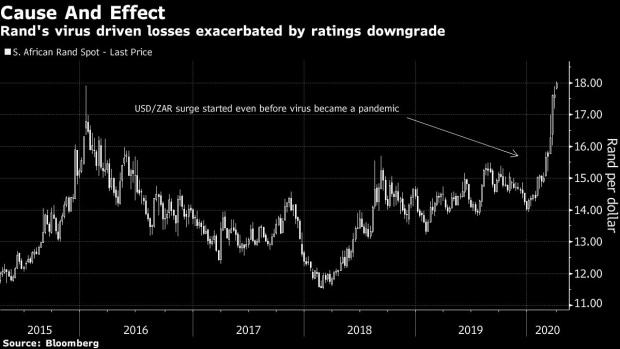 South African rand coins sit in this arranged photograph in Pretoria, South Africa, on Wednesday, Aug. 14, 2019. The rand ended a tumultuous week on a positive note, gaining against the dollar for a second day and heading for its first weekly advance in four as technical indicators suggested recent declines are overdone. Photographer: Waldo Swiegers/Bloomberg , Bloomberg

(Bloomberg) -- South Africa’s rand led declines in major currencies against the dollar on Monday as credit rating downgrades continued to ripple through markets.

The rand fell more than 2% versus the greenback to a record low of 18.0863 while Mexico’s peso came under renewed pressure, dropping as much as 1.6% in early Asia trading.

The pound also felt the pinch of a downgrade after Britain had its credit ranking cut by Fitch Ratings, which cited the weakening of public finances caused by the impact of the Covid-19 outbreak. Sterling fell as much as 0.7% in response to the after-market downgrade on Friday. Before that it had closed the week up 7.2% against the greenback.

Mexico’s peso was still reeling from the effects of a cut to its sovereign credit rating last week by S&P Global Ratings. The nation’s long-term foreign currency debt rating was downgraded by S&P to BBB, the second-lowest investment grade score, from BBB+. The peso fell 1.5% against the dollar to 23.6998 as at 8:02 a.m. in Tokyo.