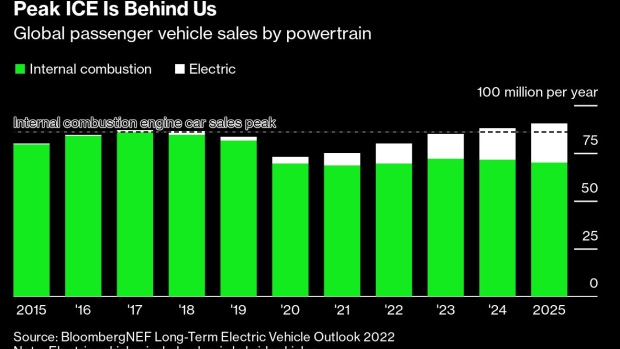 BloombergNEF published its annual long-term electric vehicle outlook today, a deep look at the future on two, three, four and more wheels. The trends are clear: Despite the challenges of a pandemic, supply-chain crunches and trouble sourcing critical minerals, electric vehicles are eating into the transportation system and taking bigger bites every year.

Before we jump into the future, it’s worth mentioning the present state of EVs. At the end of this year, there will be more than 27 million electric passenger vehicles on the road out of a global fleet of more than 1 billion. There are currently fewer than 2 million electric buses and commercial vehicles plying streets worldwide.

There are also just short of 300 million electric two- and three-wheelers — the scooters, trikes and tuk-tuks that dominate roads in Asia. Electrifying every one of these segments contributes to reducing global oil consumption. Today, it’s these smallest vehicles that are denting oil demand most, although not enough to make global oil consumption fall, at least yet.

Today’s fleet is a result of yesterday’s habits, so to speak. With another year of global auto sales behind us, we can definitively point to the peak of a more than century-long trend of increasing internal combustion engine car sales.

In 2017, global new vehicle sales reached 87 million, and all but 1.1 million had an engine. That year will end up being the all-time high for deliveries of internal combustion cars. Sales dropped below 82 million in 2019, and in 2020 they plummeted to fewer than 70 million. ICE car sales will probably tick back up, but EVs are the predominant reason total auto sales will get back to where they one were sometime around the middle of the decade.

As sales rise and fall, so shall the fleet. BNEF expects that the world’s fleet of ICE cars, excluding hybrids and plug-in hybrids, will peak at just over 1.2 billion this year, dropping only slightly in 2023. And after that, the decline is marked. By the end of the next decade, the global fleet of cars with an engine, rather than a battery or fuel cell, will be less than half the size it is today.

That switch in the source of automotive growth obviously has implications for carmakers, which have already devoted tens of billions of dollars of capital to electrification. Most of the biggest manufacturers, in fact, are already aiming more than half their capital expenditures and research-and-development spending to EVs and digital efforts, which is self-fulfilling. Today’s investment serves tomorrow’s output. If investment is going electric, then so will production and sales.

That shift has major implications for infrastructure, as well, both at the street level and for whole countries’ grids. BNEF anticipates there will be at least $1 trillion worth of investment in EV charging networks by 2040 to construct and install 339 million charging connections in its base-case scenario. If governments are serious about hitting net-zero emissions in the transport sector, charging infrastructure will need more than $1.4 trillion for just under half a billion chargers.

The electrification of road transport is well under way. There are hundreds of millions of personal electric vehicles on the road, and more than a million commercial vehicles and trucks. EV sales are growing fast and the internal combustion era is starting to fade. In less than two decades, EVs will also begin to reshape our grids, the investment that goes into building them and the strategies that enable their growth. And if countries increase their efforts to reach net-zero emissions by 2050, we will see even more dramatic change.