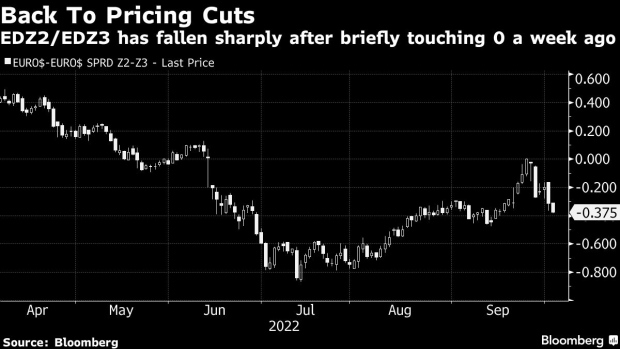 (Bloomberg) -- It’s another day of happy price action as markets reboot after September’s losses and the RBA delivered a lower-than-expected 25 bps rate hike. This has obviously spurred hopes that other central banks, most notably the FOMC, will also modulate their pace of braking, though for now pricing for the Fed funds rate through the end of the year hasn’t really changed.

Instead, it’s next year where the rate volatility is. June eurodollars have executed a 50-bps round-trip from 95.50 to 95.00 and back, and after briefly pricing out any rate cuts next year the Dec 22/Dec 23 spread has swiftly returned one-and-a-half 25 bps easings into the strip. Is it any wonder that stocks are enjoying some relief as fixed income exhales from the post-Fed, post-Kwasi maelstrom?

It will be interesting to watch commodity prices through all of this. Perhaps the biggest argument in favor of moderating the pace of rate rises is the drawdown in commodities and the concomitant relaxation of headline inflation pressure. Australia’s economy is probably the most highly exposed to the commodity cycle, so in a sense it’s little wonder that the RBA is first to take its foot off the brake.

Yet if markets become too enthusiastic about pricing a friendlier monetary backdrop, it could well be the case that commodities enjoy some of the party, too -- which would re-inject the threat of inflationary pressure, and thus encourage monetary policy makers to err on the side of aggression. This has been an aspect of the price action often lost on those calling for an early end or moderation to rate hikes throughout this year; the drop in commodity prices has been a sign that policy is working as intended, not a rationale to abandon ship.