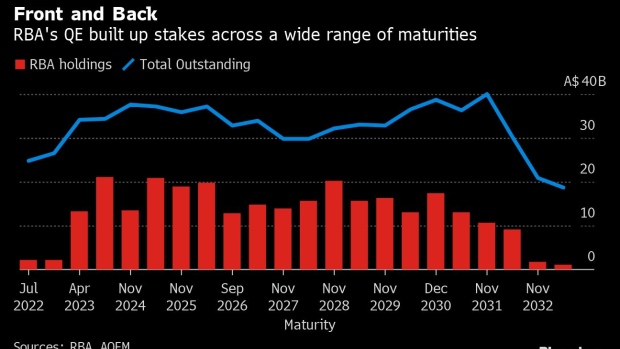 The Reserve Bank of Australia (RBA) building in Sydney, Australia, on Monday, May 2, 2022. Australian bonds sold off as investors anticipate the nation’s central bank will raise interest rates on Tuesday for the first time since 2010. Photographer: Brendon Thorne/Bloomberg , Bloomberg

(Bloomberg) -- Australia’s central bank currently has no plans to sell bonds from its portfolio, Assistant Governor Chris Kent said Monday, even as he acknowledged it has now embarked on “quantitative tightening.”

Earlier this month, the Reserve Bank of Australia raised its benchmark interest rate by 25 basis points to 0.35% and decided against reinvesting the proceeds of maturing securities in its portfolio.

“It is easier to adjust policy and influence financial conditions by calibrating one instrument rather than two in response to evolving conditions,” Kent said in the text of a speech in Sydney, explaining the reason the RBA decided against selling.

The RBA initiated quantitative easing in November 2020 as its earlier failure to join international counterparts in bond buying was helping push the Australian dollar higher and hurting the economy. It scrapped the program three months ago, having abandoned a separate yield-curve control program late last year.

Kent, who oversees financial markets in his role as assistant governor, said RBA bond sales could complicate the task of issuance by federal, state and territory authorities, including by adding to volatility in markets.

In addition, “should a bond buying program be needed in the future to provide support to the economy, it would be likely to be more effective if sales are avoided this time around,” he added.

“Setting a precedent of sales in the QT phase of the current program could reduce the effectiveness of a given value of any future bond purchases. In short, the market would probably assume ‘once a seller, always a seller.”’

Kent said the RBA’s bond portfolio and balance sheet will remain “substantial” for some years to come. By April 2024, about A$47 billion ($33.2 billion) worth of bonds will have matured while the A$188 billion provided to banks under a discount lending facility is due at the end of June 2024.