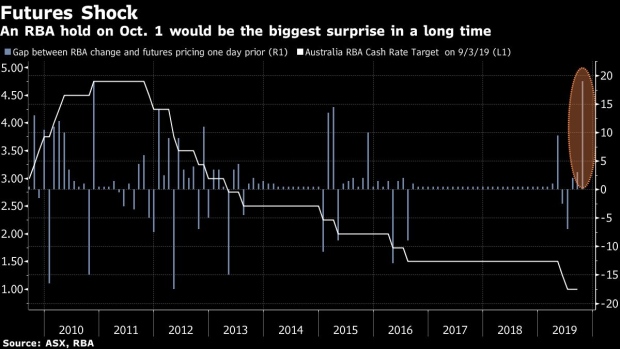 Markets and most Australian economists expect Reserve Bank chief Philip Lowe to cut interest rates for the third time in five months on Tuesday. But the man himself is giving a mixed message.

Traders see an 80% chance of the RBA taking the cash rate to 0.75% when its board meets in Melbourne, while 19 of 25 economists surveyed expect a cut. Their view is based on a cocktail of global risks: worsening economic growth mixed with shocks ranging from Hong Kong chaos to the U.S.-China dispute, not to mention Brexit and an impeachment probe of the U.S. president. And then there’s rising unemployment and falling confidence at home.

In a set-piece speech last week, Lowe acknowledged further cuts could well be required. He said the RBA couldn’t remain impervious to easing by its U.S. and European peers, otherwise the Aussie dollar would spike and hurt growth. Yet he also repeated three times in the address that the economy is at a “gentle turning point” and likely to strengthen from here, while refusing to be drawn on Tuesday’s decision, having lowered in June and July.

“The governor sounded particularly downbeat on the global economy and downside risks generated by geopolitical developments,” said Belinda Allen, senior economist at Commonwealth Bank of Australia, who expects a move on Tuesday. “While the speech was not crystal clear a rate cut was imminent, there were enough signals to indicate that 25 basis points will be delivered.”

The RBA’s back-to-back cuts matched the moves of the the Federal Reserve -- and there is no certainty that the latter will go lower. Indeed, one of the U.S.’s usually more dovish policy makers, Chicago Fed chief Charles Evans, last week said he doesn’t see the need to cut again because the two recent reductions should be enough.

Lowe’s confidence in an uptick -- if only a moderate one -- is premised on the combination of his already delivered 50 basis points of easing, government tax rebates, infrastructure spending and higher mining investment along with a weaker currency. The Aussie has slid more than 16% against the dollar since early last year -- a boon to exporters.

Australia -- unusually -- has also mostly benefited from the U.S.-China conflict as commodity prices spiked, fueled in part by Beijing’s stimulus to offset weaker exports. Yet the land Down Under is unlikely to continue to escape fallout from a weaker economy in its biggest trading partner. Already, growth in Chinese tourists and students to Australia have slowed sharply amid concerns about prospects for the mainland economy.

The first official reading of China’s economic performance in September comes with PMI reports out Monday. The services gauge is expected to stay buoyant while factories remain in the doldrums amid the trade tensions and a return of industrial deflation eating at margins.

Lowe would clearly like some fiscal support to reinforce his monetary stimulus. But that’s unlikely as Treasurer Josh Frydenberg appears determined to return the budget to surplus. As a result, it looks like the RBA and its governor will have to go it alone supporting the Australian economy.

--With assistance from Tomoko Sato and Garfield Reynolds.

To contact the editors responsible for this story: Nasreen Seria at nseria@bloomberg.net, Chris Bourke, Malcolm Scott