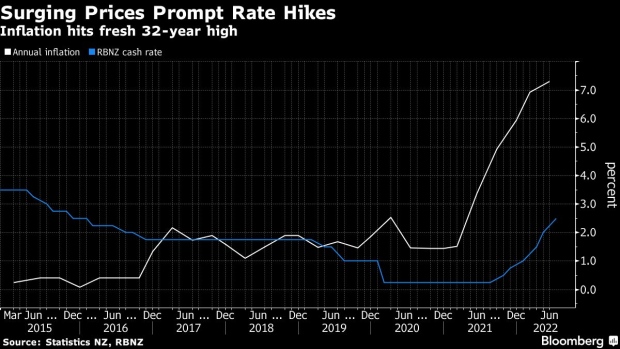 “Our core inflation is too high and that suggests at some point monetary policy was too loose for a period,” he told parliament’s finance and expenditure select committee in Wellington Thursday.

Pressed on whether he had regrets about how policy was conducted over the period, Orr replied: “I have already apologized for the current level of inflation. I have already said that the Reserve Bank was party to that.”

The opposition National Party has called for an independent review of monetary policy, arguing record-low interest rates and quantitative easing stoked a property bubble and helped drive inflation to a 32-year high.

The RBNZ expects to complete a five-yearly review of monetary policy before the end of the year, and Orr urged the committee to wait for its conclusions.

Orr’s colleagues in Australia have also faced criticism for poor communications and policy moves and will be subject to an independent review.

It was “inevitable” there would be policy mistakes given the global and domestic uncertainties when the pandemic first hit, Orr said.

“The worst mistake we could be having would be fighting deflation, unnecessary unemployment and economic collapse,” he said.

“We have ended up with the better problem -- but it is a problem -- which is inflation, core inflation of 4-6% that we need to put back in the bottle.”

The RBNZ on Wednesday raised the Official Cash Rate by a half percentage point to 3% and signaled further tightening to take the benchmark toward 4% by early 2023.

Orr said the RBNZ’s primary focus when the pandemic struck was to lower long-term interest rates, and the tools deployed worked as expected.

He urged his critics to consider how the economy could have looked without that level of support, particularly as other central banks around the world were heavily stimulating their economies.

“That is the critical question,” he said. “Where would have unemployment been? How would we be managing deflation or disinflation? These are the risks we needed to assess at the time decisions were made.”

Asked if he would acknowledge it is possible the RBNZ went too hard, Orr said: “Yes, I have. Again.”