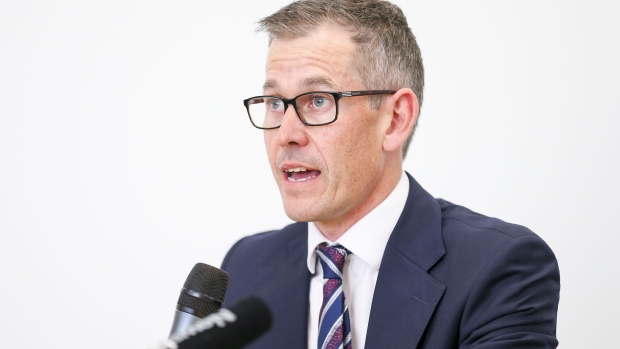 In a speech published by the Reserve Bank on Tuesday, Assistant Governor Christian Hawkesby said that amid uncertainty, and when risks are evenly balanced, “central banks globally tend to follow a smoothed path and keep their policy rate unchanged or move in 25 basis-point increments.”

The comment prompted investors to scale back bets on a 50-point rate increase at the RBNZ’s next policy meeting on Oct. 6, while economists saw it as vindication of forecasts for a 25-point move. While the central bank has given clear signals it wants to lift rates amid strong inflation pressures, largest city Auckland is still in lockdown to contain a coronavirus outbreak and considerable uncertainty remains.

“Monetary policy has always gone down the elevator and up the steps,” said Sharon Zollner, chief New Zealand economist at ANZ Bank. “We’ve been surprised by the aggressive market pricing. Monetary policy is all about looking forward, and it’s a bit murky from where I sit in Auckland.”

Investors now see zero probability of a 50-point move in October, down from a 35% chance Monday, swaps data show. They are fully pricing that the RBNZ will raise the official cash rate by 25 points.

In his speech, Hawkesby said that when the risks are heavily skewed in one direction, and there is a material threat of not achieving the bank’s mandate, “the path of least regret is to move quickly and take large steps.”

This was the approach employed by the RBNZ through the early stages of the pandemic last year, he said, when it slashed the cash rate to 0.25%.

The economy was running hot before the latest lockdown and inflation had accelerated to 3.3%, breaching the RBNZ’s 1-3% target range. But ASB Bank chief economist Nick Tuffley said the RBNZ is not facing a situation where inflation and employment could overshoot its targets for a sustained period.

“And we still don’t have a clear understanding of the longer-term impacts of this lockdown; are we going to have some quite tight restrictions for another couple of months?” he said. “So they’re saying yes we’re going, but it’s very likely to be 25 points, not 50.”