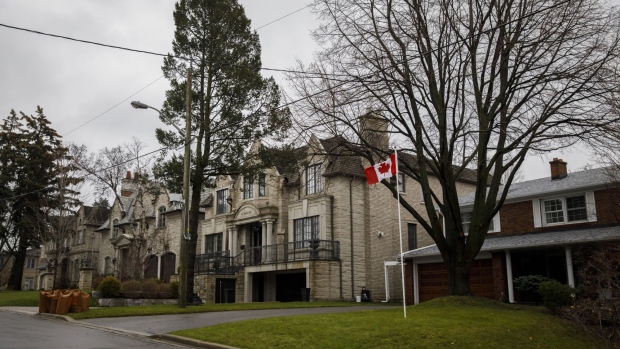 Canadian households still remain much better off than before the pandemic. , Bloomberg

(Bloomberg) -- Canadian households experienced a decline of almost C$1 trillion ($775 billion) in net worth in the second quarter amid plunging prices for homes and stocks.

The value of residential real estate holdings held by households fell by C$419 billion in the three months between April and June, while financial assets dropped by C$531 billion, Statistics Canada reported Monday in Ottawa.

The numbers illustrate the extent to which higher global interest rates are destroying household wealth in Canada, adding a major headwind to the nation’s slowing economy. The average resale price of a home dropped by 10.5% from the first quarter, the statistics agency said.

That drag on net worth from housing is likely to persist into the second half of this year, with Canadian home prices still falling and borrowing costs expected to rise further.

The Bank of Canada increased its policy interest rate by three-quarters of a percentage point to 3.25% last week, and is expected to hike again next month by another half point. The rate was holding at an emergency low of 0.25% until March.

Still, households remain much better off than they did before the pandemic, with net worth C$2.9 trillion higher than at the end of 2019. The value of residential real estate held by households is up C$2.3 trillion over that time.

Companies did much better in the second quarter, thanks to the rising prices for commodities that are offsetting the drop in household wealth. The net worth of the corporate sector jumped by C$812 billion.

(Updates with more detail on housing price declines and BoC rate hikes. An earlier version corrected the value of net worth gain since end of 2019.)