The surge in the price of silver was premature: TD Securities commodity head

GameStop Corp.’s rally came to a screeching halt this week as the shares had their biggest one-day loss on record, erasing more than US$27 billion in market value from their high.

The stock, which has been the poster child for Redditors looking to squeeze short sellers, fell 60 per cent Tuesday, closing below US$100 for the first time in a week. Several other Reddit favorites -- including movie-theater chain AMC Entertainment Holdings Inc. and clothing retailer Express Inc. -- also tumbled.

GameStop fluctuated around its US$90 a share closing level in after-hours trading.

The stock’s retreat coincided with a sharp reduction in short interest after bearish investors appeared to cover their positions. That has loosened a squeeze on the stock caused by day traders who used Reddit forums to tout and bid up out-of-favor stocks that also included American Airlines Group Inc. and BlackBerry Ltd.

“With GameStop, if you trade now you are presumably betting on what happens tomorrow or next week,” said Craig Birk, chief investment officer at Personal Capital. “There are online pleas to buy and hold, but this does not feel like a buy and hold situation.” 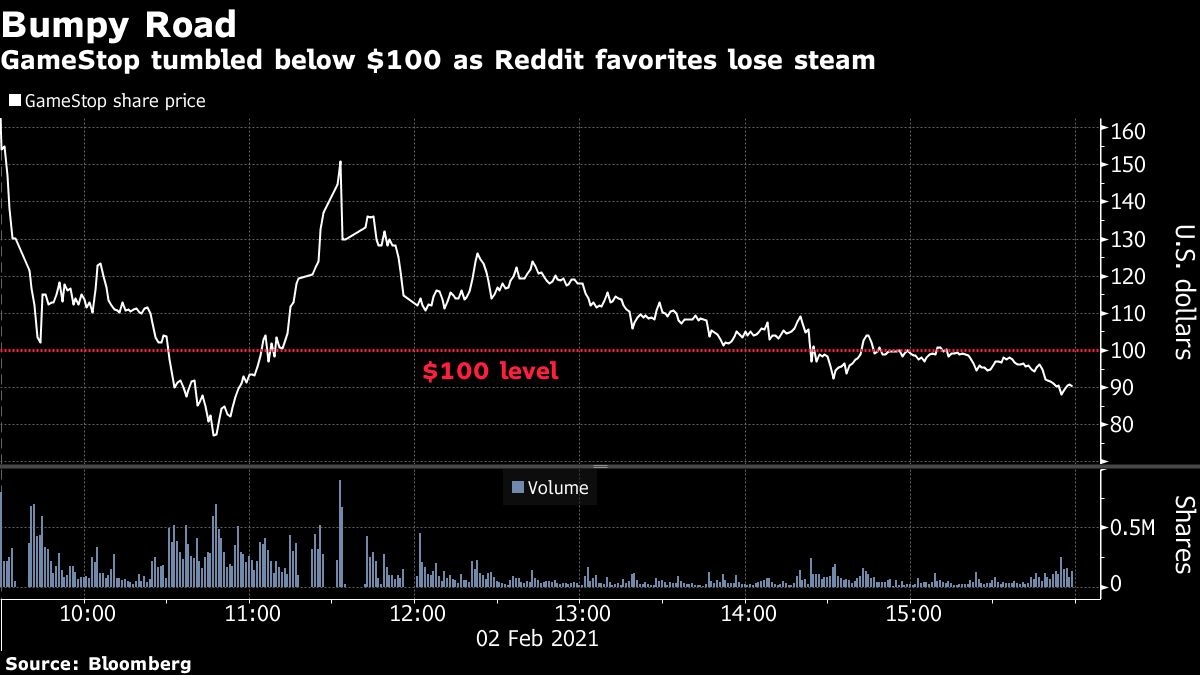 GameStop has now given up more than 80 per cent of the sharp gains that were fueled by last month’s attack on short sellers. Even with the latest pullback, however, the Grapevine, Texas-based retailer is still up 377 per cent year-to-date.

AMC trimmed losses to 41 per cent and at US$7.84 is more than 50 per cent lower than last week’s intraday high. Express declined 32 per cent and has lost more than three-quarters of its value since peaking on Wednesday.

“Once you get through some of this initial speculation, the question becomes what are the fundamentals of the company,” said Chad Oviatt, director of investment management at Huntington Private Bank. “And when you get back to it, the fundamentals will eventually drive stock prices and that’s where you’ll see a lot of these names pull back to more reasonable price levels.”

Billionaire entrepreneur Mark Cuban told Reddit investors on Tuesday morning to hold on to their GameStop stocks if they could afford it.

“If you can afford to hold the stock, you hold. I don’t own it, but that’s what I would do,” the 62-year-old wrote on Reddit during a “Ask Me Anything Session” to discuss investment strategies.

Tuesday’s drop came despite a loosening of restrictions on the amount of shares investors can buy using Robinhood Markets Inc. On Monday afternoon, the popular trading app started allowing users to purchase up to 20 shares of GameStop, up from a cap of one before the market opened.

The lower number of shares sold short could also deal a blow to day traders’ thesis that a higher stock price would only result in more gains as hedge funds who bet against the Grapevine, Texas-based company would need to cover their shorts.

Tuesday’s capitulation spread to cult-like figures including Barstool Sports founder Dave Portnoy who has taken to social media to promote his trades since the onset of the Covid-19 pandemic. Portnoy tweeted that he had “officially sold all my meme stocks. I lost 700k ish.”

Short sellers have reduced their interest, having sustained multibillion-dollar losses with just over 1 million shares covered on Monday, S3 Partners data show. The short interest in GameStop tumbled to 51 per cent of its free float, according to data from the financial analytics firm.

Backlash against short-sellers including Citron Research had been a key rallying point for retail traders using Reddit to communicate about their bets.

--With assistance from Paul Jarvis, Kristine Owram and Divya Balji.