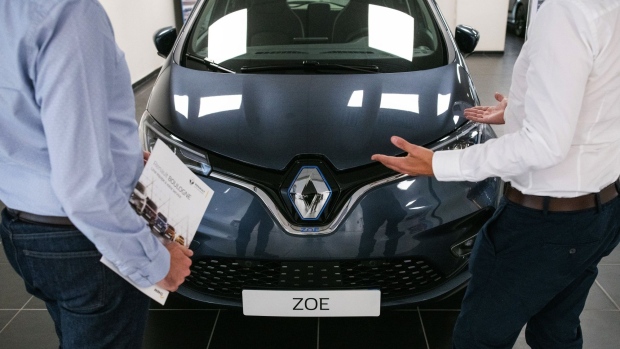 Employees beside a Renault Zoe R135 electric automobile inside a Renault SA showroom in Paris, France, on Wednesday, June 9, 2021. The manufacturer announced on Wednesday the creation of ElectriCity, a wholly owned unit that combines operations at three sites in Douai, Maubeuge and Ruitz and will aim to produce as many as 400,000 vehicles annually. Photographer: Benjamin Girette/Bloomberg , Bloomberg

(Bloomberg) -- China’s Envision Group is scaling back the size of its planned electric-vehicle battery plant in northern France, a project developed for Renault SA that could expand to supply other automakers.

Envision AESC, the battery unit of the Shanghai-based parent, aims for a capacity of 30 gigawatt-hours a year or more from the site by 2029, it said in a document posted on the website of French authority CNDP. Earlier this year, the company had projected 43 gigawatt-hours by the end of the decade.

The downsizing follows a decision to build the facility on a parking lot adjacent to Renault’s Douai assembly plant rather than a wooded area that’s a natural habitat for wildlife, according to Ayumi Kurose, who heads the project at Envision.

“It would have been complicated to build a battery factory in that zone,” Kurose told reporters Thursday. Public hearings on the project are due to start Nov. 8.

Envision’s battery plant is one of two competing projects -- Stellantis NV is investing in a similar factory in the region -- intended to supply carmakers shifting away from internal combustion engines. The sites are getting government subsidies and enjoy strong political backing because they promise jobs and industrial activity.

In Germany, Tesla Inc. has been experiencing delays building a car and battery factory in a small town outside Berlin because of lawsuits from environmental groups concerned about water use and wildlife.

Envision seeks to start producing at the site by the end of 2024, with initial annual output of 9 gigawatt-hours reserved for Renault, according to the 68-page document. The 90%-automated factory will require a starting investment of 800 million euros ($926 million) and employ as many as 1,200 people.

Envision now plans to set up three facilities with a capacity of 9 gigawatt-hours each and a smaller one with 4.5 gigawatt-hours. One reason why the company chose the region is access to low-carbon electricity from nuclear power stations and wind turbines.

Renault has said it may need as much as 24 gigawatt-hours of cells a year from Envision by the end of the decade.

“We might be able to go higher if we can make the plants smaller, but it’s still under study,” Kurose said.

The company is in talks with at least five other automakers in Europe for battery-supply deals, Envision adviser Patrick Pelata said at the same event.

Renault has also partnered with French startup Verkor on batteries for its premium electric vehicles. Verkor said in June it’s planning to set up a 16 gigawatt-hour factory in France, with 10 gigawatt-hours reserved for Renault.

(Updates with information on Tesla’s project in sixth paragraph.)