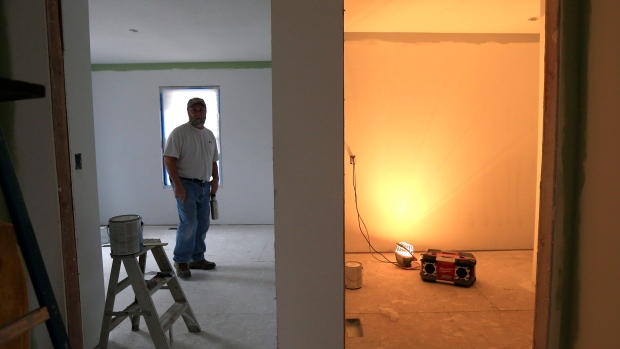 Danny Jones takes a break from painting at a newly built home in Topeka, Kan., Thursday, Feb. 25, 2016. , The Associated Press

CALGARY -- An army of Canadian do-it-yourselfers building fences, repairing decks and slapping thousands of litres of paint on weather-beaten siding have helped building centres across Canada escape the worst of the pandemic economic downturn.

"Our contractor sales in the beginning went up, we believe, because people were afraid they were going to be shut down if they couldn't get material so they were just stockpiling everything," said Alex Yakovyshenko, general manager of Haney Builders Supplies Ltd. in the Metro Vancouver city of Maple Ridge.

"Then that subsided quite a bit. But then the retail started coming in."

Yakovyshenko feared when COVID-19 lockdowns started in March he would have to lay off workers at his hardware store and lumber yard. The business was shut down for a couple of days to buy protective gear and figure out how to operate under pandemic regulations.

But he wound up boosting his staff count to 63 from 56 amid strong sales volumes to handle customer access, enhanced sanitizing of fixtures and carts, curbside pickup and home deliveries.

The real estate software and research company had forecast an increase of about three per cent this year after the home renovation market grew by nearly five per cent to $80.6 billion in 2019.

"Generally speaking, we're looking at all provinces seeing some decline," he said, adding deeper drops are expected in Quebec, which restricted its renovation sector for longer than the rest of Canada, and in Alberta, which is suffering a deeper recession because of low oil prices.

Altus counts capital improvements and repair work in its residential renovation numbers. About two-thirds of the work is done by contractors, so it includes the cost of labour and material. The DIY portion is mostly cost of material.

"In terms of DIY activity, there have been some interruptions in terms of people's ability to get materials delivered or purchased in different jurisdictions," Norman said.

"But, on the other hand, a lot of people have a lot of time on their hands and are getting around to projects they were considering but hadn't found the time to do before."

The pandemic has forced the 250 independent hardware and lumber stores represented by the Lumber and Building Materials Association of Ontario to change the way they do business, said president Dave Campbell.

"From an employment point of view, some have had to do layoffs but many have had to rehire because now that the retail is opened up, they're getting customers coming in, particularly for home renovation products," he said.

His members have had to adapt to new communications methods to let customers know they're open -- sometimes with curbside pickup, phone or online ordering and reduced hours -- but they've also benefited by being able to largely avoid long lineups occurring due to physical distancing restrictions at the big box stores, he said.

North American big box stores, meanwhile, have been doing fine, with Home Depot Inc. and Lowe's Cos. Inc. both reporting same-store sales increases in their fiscal first quarters ended in early May.

The renovation business has been "pretty steady" in his province, said Scott Fash, executive director for BILD Alberta, which has 1,800 members in land development, residential construction and renovations.

Many remain apprehensive, however, about what will happen as government wage and business subsidy programs run out later this year, especially if a second wave of COVID-19 infections erupts, he said.

Some have noticed more demand for home office renovation projects, suggesting people working from home expect to continue to do so.

"The worry is that this is just a small little positive hiccup as a result of people being stuck in their houses for so long and thinking about (renovations)," he said.

"I think there's concern that the rubber's really going to hit the road come fall if we don't see a substantial rebound in the economy."

Campbell said his members in Ontario are also worried about a new pandemic wave, and the ability of government to keep up its support.

But Norman said the industry should take heart from the way Canadians have handled working from home during the pandemic, suggesting there's no reason why the renovation sector wouldn't continue to perform well during a second wave.

"We're continuing to invest in things that will help us if (the coronavirus) were to 're-surge' and we went back to what it was like in March and April.

"We're doubling down on things like shields and other protective equipment, now that it's a little easier to get."