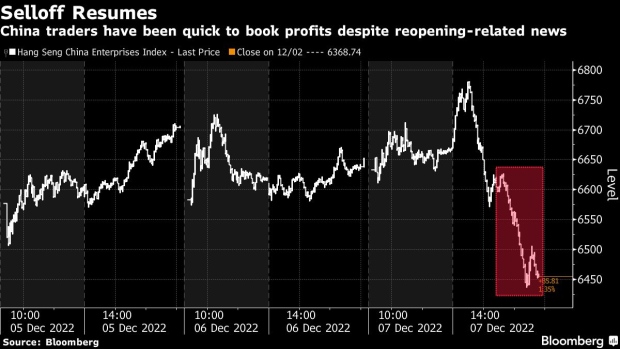 (Bloomberg) -- Chinese stocks listed in Hong Kong suffered a late-day rout, as investors judged that the path to a reopening will be rocky and the prospects for an economic recovery uncertain.

The Hang Seng China Enterprises Index closed 3.3% lower in its worst day in more than a month, as tech and property shares slumped. A post-lunch break rally fueled by China’s 10 new measures for dealing with Covid-19, which included a scrapping of testing rules in most public venues nationwide, quickly evaporated.

With doubts remaining around the path to the reopening of Asia’s largest economy, market participants have been quick to book profits after sporadic rallies. There are also worries about a likely surge in infections and further disruption to the economy next year, even as senior officials are said to be debating a growth target of around 5%.

“Though the market is still trading on the positive expectations, we are not entirely out of the woods, as we still have to get past the panic that might come with the first wave of infections,” said Ma Xuzhen, a fund manager at Longquan Investment Management.

Country Garden Holdings Co. tumbled 15%, declining the most on the Hang Seng China gauge, after raising $619 million via a share placement — its second offering in a month. A gauge of Hong Kong-listed tech shares declined the most since Nov. 3.

An index of Macau gaming stocks ended 1.9% lower after jumping as much as 9.5% as authorities said they’ll follow the mainland in easing Covid curbs.

Sentiment was worsened by weak trade data, with China’s exports and imports both contracting at a steeper pace in November. The Hang Seng Index dropped 3.2% while the mainland’s CSI 300 closed 0.3% lower.

“The uncertainties remain high” especially regarding how disruptive the exit from Covid Zero could be and whether policymakers are willing to leverage up the economy, Macquarie International Services Ltd. economists including Larry Hu wrote in a note.

--With assistance from April Ma.