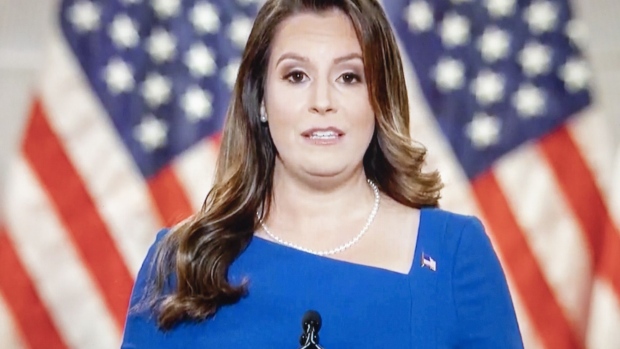 Representative Elise Stefanik, a Republican from New York, speaks during the Republican National Convention seen on a laptop computer in Tiskilwa, Illinois, U.S., on Wednesday, Aug. 26, 2020. Vice President Pence will make the case for a second term for himself and President Trump today capping a night at the convention designed to emphasize the military, law enforcement and public displays of patriotism. , Bloomberg

(Bloomberg) -- Democrats retook the House majority in 2018 in part by running a record number of female candidates. This year, Republicans took a page from that playbook to win back some seats.

The GOP sliced into the Democrats’ advantage in the House in the Nov. 3 election, powered by their own 2020 class of recruits that will add at least 15 women to their ranks when the next Congress is seated in January.

“Every single seat that we flipped was either won by a woman, a minority or a veteran,” New York Republican Elise Stefanik, who led an effort to recruit female candidates, said in an interview.

This was another record year for female congressional candidates for both parties. More than 300 women ran for Congress in this year’s general election, 44 more than the previous record set in 2018. Although they are not yet close to parity with men, at least 141 women will be serving in the 117th Congress, according to the Center for American Women and Politics. Several House seats are still undetermined.

There will be at least 28 Republican women in the House next year, up from 15 currently. Democrats will have at least 89 women, compared to 88 now.

Stefanik had a direct hand in recruiting some of the incoming Republican women through E-PAC, the political action committee she started after the 2018 election, to help mentor and raise money for Republican women candidates.

“They earned the districts themselves, but it was important to provide financial support and mentoring to them,” she said.

One of the beneficiaries was Ashley Hinson, a Republican elected to represent Iowa’s first congressional district.

“There were a couple of key women’s groups,” Hinson said in an interview. “When I look at the work that they did to try to help elevate women candidates for many of these very competitive seats, it was invaluable.”

Independent analysts had projected Democrats to expand their House majority in the 2020 election, but instead will see in shrink. With six races yet to be called, Democrats now have 222 seats to 207 for Republicans. That’s down from the 232 seats they held going into the election, despite Democrat Joe Biden winning the presidential election.

In a press conference last week, House Speaker Nancy Pelosi said she is optimistic about the record number of Republican women, and she congratulated them. Still, the California Democrat cautioned that they will still have their differences.

“Doesn’t mean we have shared views, but hopefully we can find some common ground,” Pelosi said.

Republicans will not only have more women, but also more people who identify as racial minorities in their conference next year. House Minority Leader Kevin McCarthy, a Republican from California, said the GOP’s incoming class is continuing the legacy of “the party of Lincoln.“

“Half of the freshmen are either women or minorities,” McCarthy said. “This makes me very proud as a Republican and as an American.“

“Last year, when I went to D.C., I was very impressed,” Steel said. “You can see it’s not just women, but they’re veterans, people of color and all of those who are qualified, who are women and who are very strong. It is America and we are representing America.”

Steel’s sentiments were echoed by her classmates. For them, the diversification of the Republican party is long overdue.

“It really does send a message that every seat that Republicans flipped was by a minority or by a woman,” Cammack said. “This is definitely not your grandpa’s Republican party.”

Many of the Republicans who unseated Democrats in this election ran on traditional Republican issues of helping small businesses and lowering taxes.

A few took positions more in line with President Donald Trump. Republican Marjorie Taylor Greene, for example, won in a deep-red Georgia district even after GOP leaders distanced themselves from her racist, Islamophobic and anti-Semitic statements she made on videos. She also had delved in the QAnon conspiracy theories but said once started finding misinformation she “decided I would choose another path.”

Republicans will have a chance to add to their gains in the 2022 elections. The party in control of the White House historically has lost seats in Congress in the midterm elections.